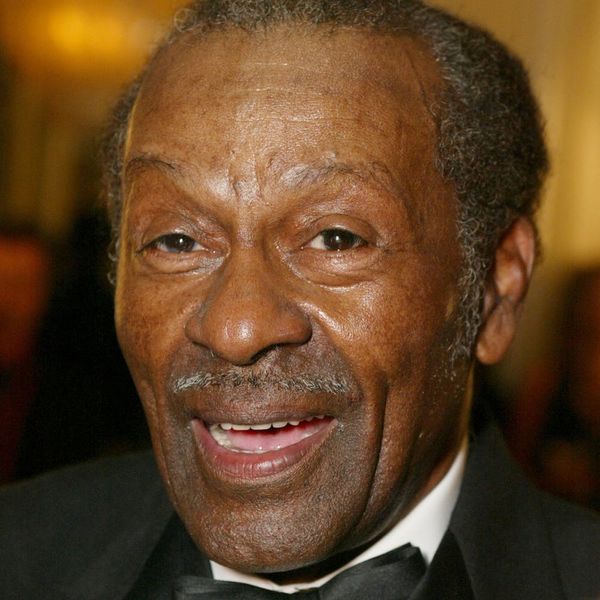 Last night, the world lost yet another musical great, as legendary musician Chuck Berry passed away at 90 years old. The singer, known for such classics as “Johnny B. Goode,” “Roll Over Beethoven,” and “Maybellene,” is credited with helping to lay the foundations of the rock and roll genre.

He was the very first person ever inducted to the Rock and Roll Hall of Fame, and needless to say, his memory, along with his music, will not soon be forgotten. Celebrities took to the web in droves to pay their respects and express how much the artist meant to them — read their touching tributes below.

I am so sad to hear of Chuck Berry's passing. I want to thank him for all the inspirational music he gave to us. 1/3 pic.twitter.com/9zQbH5bo9V

1. Mick Jagger: The Rolling Stones came out in force to commemorate the late music legend, with new daddy and frontman Jagger dedicating three posts to Berry and saying, “He lit up our teenage years and blew life into our dreams of being musicians and performers…his lyrics shone above others and threw a strange light on the American dream. Chuck, you were amazing and your music is ingrained inside us forever.”

2. Keith Richards: Jagger’s bandmate Richards was also clearly distraught over the loss of one of his own personal musical heroes, posting plenty of pics and saying, “One of my great lights has gone out.”

song of the day: YOU NEVER CAN TELL – CHUCK BERRY pic.twitter.com/floZiiRY4d

The great #ChuckBerry is gone. A true musical pioneer, and what a life he led. Goodbye and thank you for the rocking good times.

5. Bruno Mars: Mars shared fellow artist Lenny Kravitz’s sentiments, adding in an “RIP” of his own.

In 1977 the Voyager Golden Record was launched into space, and included "Johnny B. Goode". SNL predicted the first response from the aliens would be these four words. #RIPChuckBerry

6. Olivia Wilde: Wilde gave us all a bit of a history lesson, saying, “In 1977, the Voyager Golden Record was launched into space, and included ‘Johnny B. Goode.’ SNL predicted the first response from the aliens would be these four words. [‘Send more Chuck Berry.’] RIPChuckBerry.”

the fucking legend, mr charles edward anderson berry. you will be so missed. i grew up listening to you, and it was because of you that i gained my immense love for rock and roll. words cannot even begin to describe the impact you've had on this world as well as being apart of the very roots of music today. you changed the game for everyone, and we will always adore you. rest in peace lovely chuck, you beautiful soul.

7. Paris Jackson: Berry’s music had a huge influence on newly signed model Paris Jackson growing up, a fact she expressed via Instagram. “The f*cking legend, Mr. Charles Edward Anderson Berry. You will be so missed. I grew up listening to you, and it was because of you that I gained an immense love for rock and roll. Words cannot even begin to describe the impact you’ve had on this world as well as being a part of the very roots of music today. You changed the game for everyone, and we will always adore you. Rest in peace, lovely Chuck.”

Rest In Peace, Chuck Berry. You changed music. You changed everyone that listened to your music. Thank you. https://t.co/NxwfWRFD3S

8. Alyssa Milano: The actress shared several of Berry’s hits, saying that he “changed music” and everyone that listened to it.

One of the most underrated lyricists- #RIPChuckBerry

What was your favorite Chuck Berry tune? Share with us @BritandCo.

Nicole Briese
Nicole is the weekend editor for Brit + Co who loves bringing you all the latest buzz. When she's not busy typing away into the wee hours, you can usually find her canoodling with her fur babies, rooting around in a bookstore, or rocking out at a concert of some sort (Guns N' Roses forever!). Check out all her latest musings and past work at nicolebjean.com.
Music
Music
Music social media twitter
More From Music