Rejoice! April the Giraffe Has FINALLY Given Birth and You Can Watch the Whole Thing Online 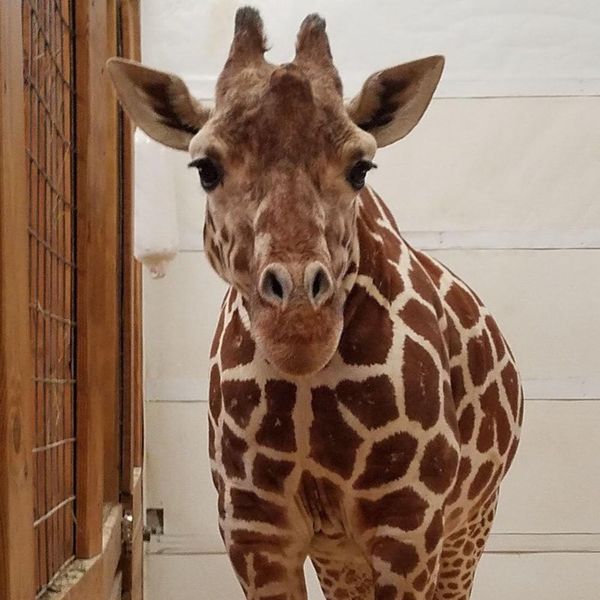 April the Giraffe quickly rose to internet superstardom when her keepers at the Animal Adventure Park in New York decided to livestream her pregnancy. Since coverage of April’s road to motherhood first began back in February, the cutie giraffe has managed to steal the hearts of over 32K Twitter followers and millions of YouTube subscribers who anxiously awaited the arrival of her fourth calf. Today, all that waiting has FINALLY paid off: After 15 months (yes, FIFTEEN months) with child, April has finally given birth.

The whole thing was captured in an impressive video for the world to see, but if you missed it, don’t worry: You can still catch all the action here (fast forward to the 2:27:00 mark in the video above to see it all unfold first-hand).

The birth began in the wee hours of the morning when April (or rather, her zookeepers, who are probably much better at typing) took to Twitter to share a photo of hooves peeking out, confirming that yes, April was indeed going into labor. While you might have expected a long, grueling process after the extended pregnancy April endured, you can breathe a sigh of relief, because the whole thing took no more than a few hours.

As the momma giraffe walked around her compound, more and more of the calf became visible until finally, he (it’s a boy!) dropped to the ground. But not to worry — April was there to show her baby boy some major love.

The adorbs giraffe calf learned to stand up at lightning speed, and Animal Adventure Park has since posted a snap of the happy family to Facebook with the caption “All is well.” Can we all just take a second to awww collectively, like these passionate April supporters already have on Twitter?

So exciting April the Giraffe had her baby 💝

According to reports, April will now raise her baby naturally, and, in six to 12 months, he will be moved to a separate facility. Before that happens, though, we’re keeping our fingers crossed for MANY more videos and photo updates: like an official baby name announcement!

Are you a devoted April the Giraffe follower? Tweet us @BritandCo.