Rep. Maxine Waters’ Response to SOTU Does NOT Mince Words 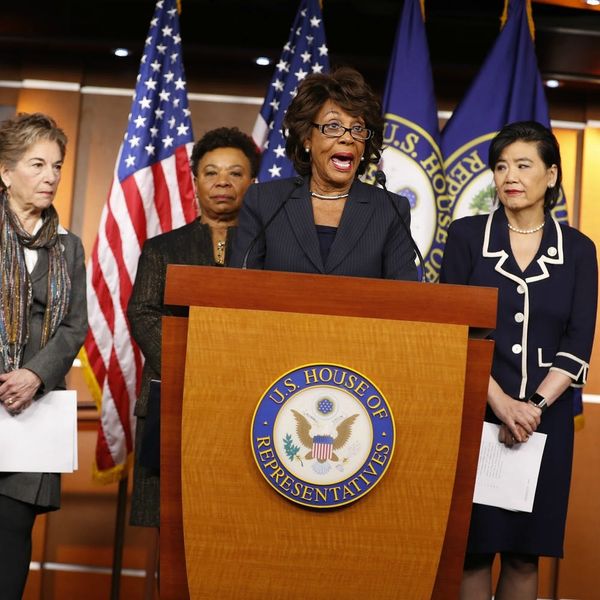 California Representative Maxine Waters chose to boycott President Trump’s first State of the Union address on Tuesday night, but opted to respond to the president’s words with her own brief message which aired on BET yesterday. In her short response, Waters’ fiery personality shone through, and she didn’t mince words in broaching what she feels is a negative overall tone in Washington right now.

“Yesterday, Donald Trump had the audacity to call upon people to set aside differences, when in reality, he has divided Americans in ways no other modern president has done,” Waters began.

Waters went on to remind viewers of the president’s previous comments on Mexicans and the racially charged travel bans his administration has worked to implement.

“It’s impossible to believe him,” she deadpans,”when he tries to declare that he wants to bring the country together.”

Waters then goes on to straight up accuse the president of being racist, and calls Trump out for regular “vulgarity” making the president, in her eyes, “unsuitable for children.”

Next, the woman fans call “Auntie Maxine,” decided to land a punch in the face of the administration’s foreign policy, reminding folks about the president’s verbal attack on our allies in NATO, our refusal to comply with the Paris Accord, and the administration’s seemingly cozy relationship with Russia’s Vladimir Putin — a man and nation who are under intense scrutiny for possible meddling in the 2016 election cycle.

Finally, Waters lashed out at the Republican-led Congress, saying that those in power in the party are too yielding to the president’s dangerous whims, and their complacency has equal weight in the state of US politics. Reminding people that the current administration inherited a strong economy from President Obama, she calls specifically on Paul Ryan and Mitch McConnell for their towing of the company line in all things Trump.

“Increasingly, millions of Americans have recognized that Donald Trump is detrimental to our nation. We deserve better. That’s why I have called for his impeachment.”

She goes on: “Some believe it’s too early. I disagree. The time is now. We must organize, challenge and resist.”

While this isn’t the official Democrat response to SOTU, Waters’ tendency to unabashedly speak her mind has created a huge fan base within groups who want to see the president ousted, and continues to draw ire from those GOP fans who think her brash words are disrespectful.

What do you think of Maxine Waters’ rebuttal? Let us know @BritandCo!