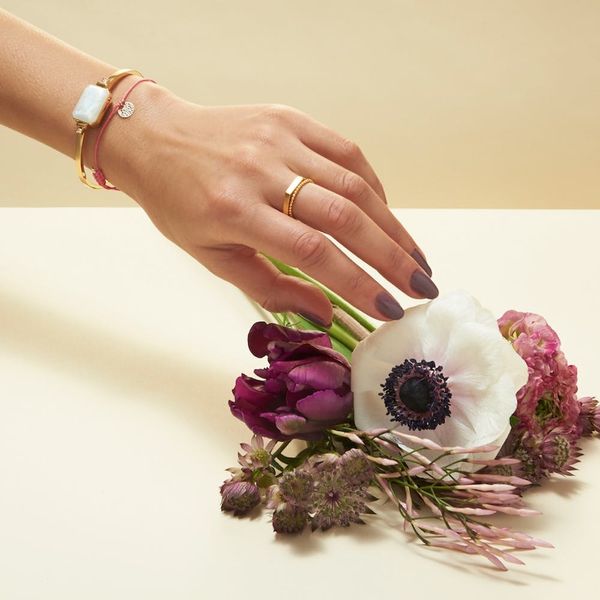 Of all the wearable tech companies, there are only a few that have been able to marry style with function as seamlessly as Ringly, purveyor of *actually* fashionable wearables. The brand launched the most discreet yet on-trend notification wearable ring back in 2014, and are back at it again with something entirely new. Ringly isn’t just making rings anymore, and they’ve incorporated one of the major must-have features into this new accessory.

Meet the Aries bracelet ($279). One look, and we know this might just be the most attractive piece of wearable tech we’ve seen on the market yet. The bracelet comes in four natural semi-precious stone styles: Lapis, Tourmalated Quartz, Rainbow Moonstone and Labradorite. According to Founder and CEO Christina D’Avignon, these are the company’s four most popular stones.

The stones are cut in a similar shape as those in the now-iconic Ringly cocktail rings. “We wanted to stay true to the original Ringly design,” Christina says. The stone is perched on top of a slim, heavy gold-plated band and is flanked by either a casual pyramid design or two dressier gemstones. “It is our belief that your jewelry should not only be beautiful, but also smart.”

Just like the rings, the bracelet links up to your smartphone via Bluetooth, and lights up in different colors to let you know when you’re receiving a call, a text, an email or even alerts from social media. The corresponding app now allows you to link your hardware to over 100 different apps (!) including Snapchat, Instagram, Facebook, Uber and more. The biggest news, however, is that their new notification bracelet features the number one most-requested feature of all time: step tracking. YAAAAS. With improved battery life, the Aries bracelet also can go up to three or four days without charging, depending on usage.

The new Aries bracelets are debuting today and for a limited time only, and you can pre-order one for just $195. The first thousand customers also get a ticket into Ringly’s Diamond Club and will receive a real diamond on the side of their bracelet where the light shines through. Now get to steppin.’

Will you be checking out the Aries bracelets? Tweet us @BritandCo!

Kimberly Wang
Kimberly Wang writes about all things pop culture, tech, style, and beauty. She's a Bay Area transplant and has an MFA in Creative Writing from Columbia University. On a sunny New York day, you can find her hanging out with her mini schnauzer Isabelle Jellybean on a blanket in Central Park.
Wearable Tech
Home News
Wearable Tech