25 Wacky Roadside Attractions for Your Next Road Trip 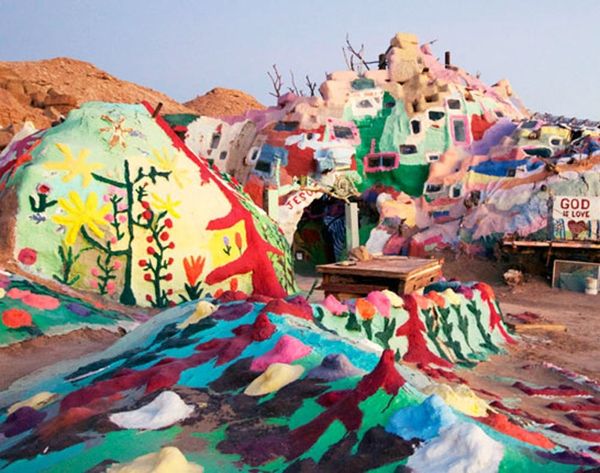 The classic summer road trip evokes thoughts of the open road, wind blown hair and rocking out to classic highway tunes. It looks amazing in movies (we’re looking at you, Road Trip). But in reality most journeys are a series of gas stations, bathroom breaks and fast food feasts. Make your summer travels a little more interesting with these 25 quirky museums and roadside attractions.

1. Cadillac Ranch (Amarillo, TX): Something you don’t typically hope to see while on a road trip is a series of cars with their noses dug into the ground. But head for Cadillac Ranch and it’s exactly what you’ll be looking for. This art installation is essentially a graveyard of 10 Cadillacs dating from 1949 to 1963. The cars are meant to represent the rise and fall of the American automotive industry. Visitors are encouraged to bring paint, markers or whatever other medium they like and add their own stamp to the exhibit. (image via Where RV Now)

2. Bigfoot Discovery Museum (Felton, CA): Hear Yeti and Sasquatch tales and see video footage, audiotapes and a local map with pushpins marking over 150 sightings. You can even hang out in the outside cafe and watch Bigfoot documentaries of your choosing. (image via Red Tricylce)

3. Hobo Museum (Britt, IA): This little treasure located in an old theatre pays tribute to the vagabond lifestyle. Hobo crafts, art and photographs cover the walls of this bohemian establishment. Time your visit right and you could even end up there in the midst of their annual hobo convention… what that entails we aren’t entirely sure. (image via Atlas Obscura)

4. Fremont Troll (Seattle, WA): Fittingly located underneath an overpass lurks a giant one-eyed troll clutching a Volkswagen Beetle. The two-ton sculpture was created in 1990 by a team of four local artists. If you flash him a charming smile, he’ll likely let you pass. (image via Trip Advisor)

5. Salvation Mountain (Niland, CA): We are dropping all of our plans and heading straight toward this rainbow-colored wonderland. Located in an old river bank just outside Palm Springs, the artist estimates he has used close to 1,000 gallons of paint creating images of psychedelic flowers, trees, waterfalls, suns, bluebirds and countless other objects. (image via NJ in LA)

6. Coral Castle (Homestead, FL): This home and monument was built over a period of 28 years by Edward Leedskalnin for his lost bride who jilted him at the altar. Expert masons are baffled by the abstract, dramatic shapes Leedskalnin was able to create with coral rock and basic tools. Though asked frequently, he never revealed his technique or let anyone see him work. (image via Of Sand and Snow)

7. Winchester Mystery House (San Jose, CA): After the untimely death of both her husband and daughter, rifle heiress Sarah Winchester was told by a spiritualist that she was haunted by the ghosts of people killed by her family’s weapons. To confuse spirits and stay safe, she ordered construction on her mansion to take place night and day for the remainder of her life. The 160-room house is sprawling with stairs that lead to nowhere, doors that open to blank walls and even a seance room. (image via Stowaway Mag)

8. The Neon Museum (Las Vegas, NV): It’s not surprising that a city built for nightlife is home to this gaudy, glitzy museum filled with signs from old casinos and other businesses. Displayed over six acres of land, the outdoor museum is best seen at night when the desert has cooled off and the signs are lit up. (image via Modern Handcraft)

9. Lucy the Elephant (Margate, NJ): Ever wanted to know what the inside of an elephant looks like? Built in 1882, this six-story elephant has been home to several businesses including a bar and and an office. Today visitors can climb a spiral staircase up her leg and take in the view from the carriage on her back or enjoy the spacious hall inside her belly. (image via Atlas Obscura)

11. The Enchanted Highway (Regent, ND): Interstate 94 in North Dakota looks a lot like a standard American highway until you drive through a 32-mile stretch sprinkled with sculptures constructed from salvaged scrap metal. Expect to drive past anything from floating fish to Teddy Roosevelt riding a horse. (image via Tom MN)

12. Prada Store (Marfa, TX): A Prada store in the middle of the desert? Not exactly. This installation created by two Berlin artists has never been open for business. The door remains permanently locked with 20 left foot shoes and six purses on display in the window. The artists built the store without any intention of ever maintaining it, which means that the building will slowly be reclaimed by the elements. See it while you can! (image via Flickr)

13. Drive-Thru Tree Park (Legget, CA): Usually when you tell people you drove through a tree you receive a response that is more concerned than excited, but not here. The Drive-Thru Tree Park is located where Highway 1 and 101 meet. For $5 you can drive through Chandelier tree, take in a beautifully preserved patch of the redwoods and have a picnic in a meadow. (image via Roadtrippers)

14. Pizza Brain (Philadelphia, PA): Home to the world’s largest collection of pizza memorabilia, Pizza Brain is the nation’s first pizza museum. If all that gawking over America’s favorite handheld food works up an appetite, you don’t have to travel far to get a fix. The museum doubles as an artisan pizza shop. Count us in. (image via Robert Hornak Photography)

15. Ave Maria Grotto (Cullman, AL): Think of this as dollhouse headquarters. In an old quarry on the grounds of St. Bernard Abbey are 125 miniature reproductions of some of the most famous religious structures of the world. Designed by a monk in the 1930s, here you will find the Great Wall of China, Leaning Tower of Pisa and scenes from ancient Jerusalem all within acres of each other. (image via Samantha’s Garden)

16. Graceland Too (Holly Springs, MS): Located halfway between Graceland and Tupelo (Elvis’s birthplace), you’ll find a house belonging to Paul McLeod. Decked floor to ceiling in Elvis memorabilia, this house is the ultimate, over-the-top homage to the king of rock ‘n’ roll. For a mere $5, you’ll be guided through hallways stacked with records, postcards, costumes and more. If you arrive past common visiting hours, don’t worry. McLeod welcomes visitors 24 hours a day. 4 a.m. Elvis tour, anyone? (image via Krrb)

17. The Blue Whale of Catoosa (Catoosa, OK): Located off Route 66, this old relic used to be a beloved swimming spot for locals and travelers alike. People would fling themselves off his tail and slide out the side of his head. In 1988, the owner had to close it down due to arthritis and has since passed away. Sadly you cannot swim here anymore but the recently restored whale is definitely still worth a visit. (image via Diary of an Anetsy Lover)

18. London Bridge (Lake Havesu, AZ): The original London Bridge couldn’t handle the city’s increasingly heavy traffic and so was auctioned off to an Arizona oil baron in 1971. He spent $2,460,000 on the bridge and an extra $7 million to have it dismantled and reconstructed brick by brick. Paying a visit to this popular boating town is just like a real visit to the Thames… except for the abundance of women in exceptionally small bathing suits and 120 degree summertime heat. (image via Go Kingman)

19. The Lost Sea (Sweetwater, TN): America’s largest underground lake is tucked away 140 feet below Tennessee. Take a glass bottom boat across “The Lost Sea” and view rare collections of cave formations and 20,000-year-old jaguar tracks. An added bonus: The temperature is always 58 degrees, making it an ideal escape from that sticky southern heat. (image via Lake Scientist)

20. Paper House (Rockport, MA): Chances are, when you finish a newspaper it goes in the trash can. Not so for Ellis F. Stenman, who in 1922 decided to build a house out of the stuff. The framework and floor are made of wood but everything else is a combination of newspaper, glue and varnish — even the furniture! (image via Eccentric Roadside)

21. Roswell UFO Museum (Roswell, NM): An unidentified flying object crashed on a ranch northwest of Roswell, New Mexico, sometime during the first week of July 1947. Shrouded in mystery, the incident remains a topic of discussion for many E.T. enthusiasts. At the Rosewell UFO museum, you’ll find memorabilia and information on crop circles, alien abductions, Area 51 and even a replica of an ancient Mayan sarcophagus lid from Mexico. (image via Museografo)

22. Leila’s Hair Museum (Independence, MO): No fancy tributes to Vidal Sasson here. Retired hairdresser Leila Cohoon, has collected 600 hair wreaths and more than 2,000 pieces of human hair jewelry, some of which date back to the 18th century. One pair of wreaths features strands from two sisters whose heads were shaved upon entering a convent. Locks from the heads of Michael Jackson, Queen Victoria and four presidents can also be found there. (image via Flickr)

23. Morbid Anatomy Library (Brooklyn, NY): Interested in something not so um, lively? Check out this research library and private collection of books, catalogs, photographs, taxidermy and artifacts relating to all things post-mortem. The museum just recently wrapped up a successful Kickstarter campaign in which they raised enough money to soon move into a 4,200-square-foot space that will host classes on taxidermy and have a café where visitors can snack on funeral-themed foods. (image via Morbid Anatomy)

24. Museum of the Weird (Austin, TX): The Museum of the Weird houses curiosities like shrunken heads, one-eyed pigs, a Fiji mermaid, the Minnesota Iceman, live tarantulas, a two-headed chicken and mummies. Basically, if it’s bizarre, you’ll probably find it there. (image via Roadtrippers)

25. Museum of Bad Art (Somerville, MA): Art so bad it’s good? Not really. This is the only museum dedicated to collecting, preserving and exhibiting bad art in all its ugliness. What started in the basement of a private home now holds nearly 600 pieces in two brick and mortar locations. (image via American Way)

Where are you planning on stopping this summer? We want to know!

Cortney Clift
Cortney is the senior writer and special projects editor at Brit + Co. She typically covers topics related to women's issues, politics, and lifestyle. When she's not buried behind her computer you'll find her exploring New York City or planning her next big adventure.
road trip
Home
road trip
More From Home