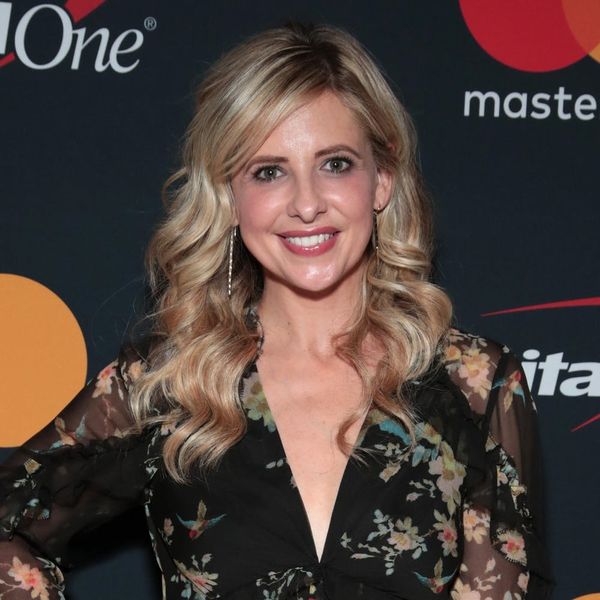 Last year, Sarah Michelle Gellar was all about the Elf on the Shelf, putting her tiny friend in all kinds of unexpected situations and sharing pics of his adventures with her social media followers. This year, the actress decided to offer fans a different kind of gift in the form of a Burger King holiday commercial that she starred in as a kid back in the ’80s.

The Buffy the Vampire Slayer alum posted the video to Instagram, and although the quality isn’t the best and the image is super grainy, it’s otherwise pretty perfect. Gellar is the little girl with pigtails singing her heart out to “Have Yourself a Merry Little Christmas.” (She even gets her own sweet solo! Just try not to melt when she says, “Merry Christmas, McDonald’s.”)

The Foodstirs founder, now 40, captioned the video, “#throwback #holidayedition I spy…a future vampire slayer…a future adventurous babysitter…and the future mother of #martymcfly #throwbacktuesday #holiday.” (It’s not quite #ThrowbackThursday yet, but we’ll ignore that.)

Not only did she identify herself (AKA a future vampire slayer), but she also pointed out two other stars who are in the clip. If you look closely, you can see that the woman sitting beside Gellar is none other than Back to the Future star Lea Thompson. Apparently, Elisabeth Shue is also in the group (which would explain the reference to Adventures in Babysitting), but we’re not sure which one she is.

Thompson reminisced about the commercial in an interview with The A.V. Club in 2012, saying, “What was interesting about the Burger King thing was that I never knew that Sarah Michelle Gellar was on my lap. I knew that Elisabeth Shue and I had done commercials together, but… My daughter [Zoey Deutch] is on Ringer, the Sarah Michelle Gellar show, and plays her stepdaughter, and the first day I met Sarah there, she said, ‘You know, we’ve worked together before.’ And I’m, like, ‘I don’t think so…’ But she had her iPad, and she brought up that commercial. I just can’t believe that nobody had pointed that out to me before! What a great casting director, huh?”

Swinging in to the last month of the year! How is it already December?!? #endoftheyearcountdown

Flash forward to 2017 and Gellar is still all about spreading holiday cheer. Taking to Instagram four days ago, she shared a clip of herself swinging in a seasonal setting, adding the message, “Swinging in to the last month of the year! How is it already December?!? #endoftheyearcountdown.”

We agree that this year has certainly flown by, but if it means we can look forward to more holly-jolly joy from SMG, we fully welcome December and the end-of-the-year countdown.

Do you have adorable holiday videos of yourself from back in the ‘80s or ‘90s? Let us know @BritandCo!