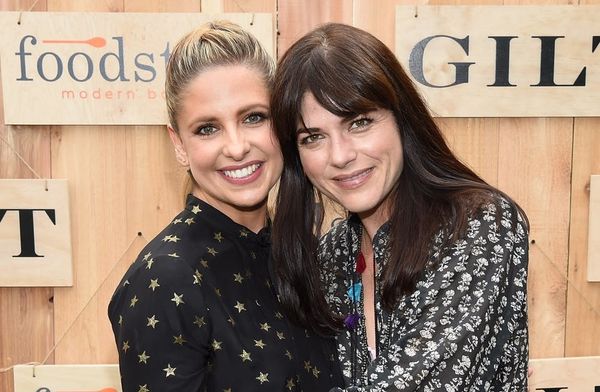 This week, Selma Blair walked her first red carpet and gave her first televised interview since revealing her multiple sclerosis diagnosis last October. It’s been an emotional few days, to say the least, but Blair has handled them with grace, courage, and honesty. And on Monday, she had that returned to her in the form of a sweet note from longtime friend Sarah Michelle Gellar.

“This is my dear friend @selmablair. Last night she stood on the world stage for the first time, since being diagnosed with MS. And later this week, she is taking an even bigger step, and speaking publicly on @goodmorningamerica,” Gellar wrote on Instagram. She also shared a photo of Blair posing in her stunning Ralph & Russo tulle gown and carrying a personalized cane as she walked the red carpet at the Vanity Fair Oscars afterparty on Sunday, February 24.

“To say I’m proud, would be a gross understatement,” Gellar continued. “When I have a cold, I want to hide from the world under my covers. But not Selma. She is facing this diagnosis, the way she faces everything, with dignity, grace, and head on. I know the support and encouragement that she has received on this platform has truly been a source of strength for her. This is not an easy journey, but Selma will not let this define her. I love you, James.”

Blair took to the comments to send some love back to her friend, with whom she costarred in 1999’s Cruel Intentions. “I love you so dearly,” she wrote.

In her recent Good Morning America interview, Blair admitted that she cried tears of relief when she first received her MS diagnosis. “I had tears,” she told anchor Robin Roberts. “They weren’t tears of panic, they were tears of knowing that I now had to give in to a body that had loss of control. And there was some relief in that.” The actress said she hopes to bring awareness to her condition by speaking out and showing what her particular case of MS looks like.

What do you think of Sarah Michelle Gellar’s note to her friend Selma? Let us know @BritandCo!