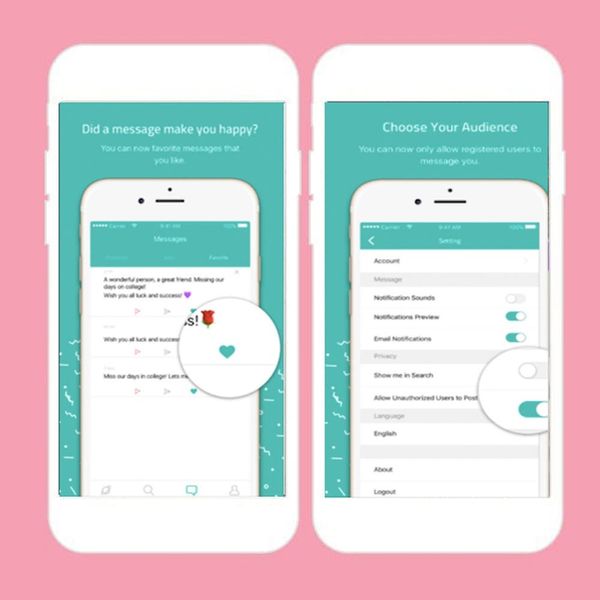 For years, Instagram, Facebook, YouTube, and Snapchat have reigned supreme as our beloved apps of choice, allowing millions of users to share their lives with the world on a daily basis. Now, however, there’s a new app reportedly taking over, and it’s one you may never have heard of.

Say hello to Sarahah, a platform where you can post a profile to receive anonymous messages. As developer Zain al-Abidin Tawfiq told Mashable, it was initially created as a tool for employees to feel free to offer constructive criticism (or mad props, depending) to their bosses. “There’s an issue in the workplace people need to communicate frankly to their bosses,” he said.

As he told the outlet, he quickly decided the app (whose name means “frankness” in Arabic) could be useful in everyday life too. “The society here [in the Arab world], we’re very connected with friends and family, and we’re very honest. We express our feelings frankly — we do it all the time.”

With Sarahah, Zain al-Abidin Tawfiq says he was able to help break down any remaining barriers there might have been between those with age differences or those in powerful positions. “Breaking those barriers, that’s what everyone wanted.”

Based on numbers alone, you might assume he was right — Sarahah has since become the number one app in at least three countries. It’s also gotten plenty of positive reviews. “People at my school use it to leave heartwarming messages and messages to make me laugh,” one reviewer wrote in the app store, with another adding, “I really love this app. I love how people can tell you how they feel.”

#Sarahah in a month:

But many people still have their doubts about the anonymous messaging service. Where some use the app to offer kind messages of positivity, others have found themselves suddenly subject to a slew of nasty, unwelcome comments from those who would use the platform to tear them down. “I’m sorry, but this app is made for bullying,” one reviewer wrote in the app store. “The first message I received was definitely not friendly. My friends and I have all received hurtful messages.”

With no chance to respond and no way to determine where the negative comments are coming from, your life can quickly become fair game to be picked apart, should you choose to share your link publicly (though there are options for making your link viewable to only those you know and trust to leave constructive feedback).

It sounds horrible, right? Opening yourself up to criticism on everything from your physical appearance to your work ethic to your personality from people you might not even know? And yet, we can’t help but think: Isn’t this exactly the type of uncalled-for social bullying that celebs are forced to deal with on a day-to-day basis?

Hilary Duff certainly felt attacked enough over any perceived “flaws” while donning a bikini in Hawaii with her son last week to post a message to would-be body shamers. And Kim Kardashian West received so many comments after posting a photo of her son Saint in a front-facing car seat that she responded via video to say that he had reached the height and weight requirements to turn the seat around.

Miranda Lambert, too, wrote a heartbreakingly honest post about cyber bullies after they ripped apart a perfectly adorable photo of her and boyfriend Anderson East.

“Just now when I looked I realized so many comments were judgmental and negative,” she wrote at the time. “Cowardly people hiding behind a keyboard or a cell phone writing their useless comments about our eyes and our clothes and our body language. What a bunch of bullsh*t. Thank you for reminding me why I read books, write songs, and spend most of my time with animals and people I trust.”

Social media has made it easy for us to connect with our favorite celebs in a forum that feels anonymous (even if it isn’t) — maybe a little too easy in some cases, as their accounts are flooded with thousands of comments from people all over the world each day. But the anonymity also makes commenters feel emboldened to say cruel things they wouldn’t say to someone’s face, which is the risk with an app like Sarahah.

If there’s one thing to be gained from any hate to be seen on the app, it’s the lesson that we should all be a little more thoughtful about our social media behavior, and a little kinder and more compassionate in our interactions with one another, either in person or online.

To quote the great Maya Angelou, as Lambert did in her original post, “’Words are things. You must be careful, careful about calling people out of their names, using racial pejoratives and sexual pejoratives and all that ignorance. Don’t do that. Someday we’ll be able to measure the power of words. I think they are things. They get on the walls. They get in your wallpaper. They get in your rugs, in your upholstery, in your clothes, and finally into you.’”

What do you think of the Sarahah app? Tell us over @BritandCo.

Nicole Briese
Nicole is the weekend editor for Brit + Co who loves bringing you all the latest buzz. When she's not busy typing away into the wee hours, you can usually find her canoodling with her fur babies, rooting around in a bookstore, or rocking out at a concert of some sort (Guns N' Roses forever!). Check out all her latest musings and past work at nicolebjean.com.
Apps
Tech
Apps social media
More From Tech