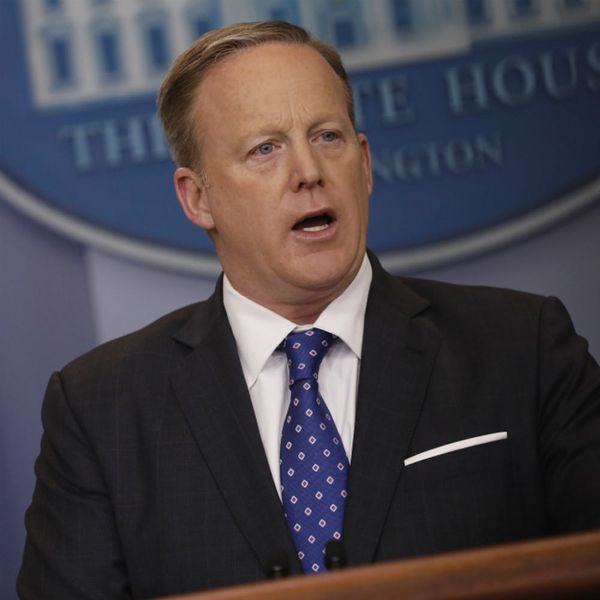 In the wake of President Trump’s announcement that he would not be attending the White House Correspondents Dinner, the White House’s relationship with the media seems more strained than ever: a feat we didn’t think was possible, following reports of a new hashtag making the rounds of #NottheEnemy. Now, things have just taken another turn for the worse, as reports have come through that “phone checks” are being performed to prevent “leaks” to media outlets.

Apparently, there are a lot of unhappy staffers in the West Wing, and more and more, they are sharing information that President Trump and his advisers don’t want getting out. Press Secretary Sean Spicer (AKA Melissa McCarthy‘s RL muse) has been tasked with shutting down these leaks, and it’s getting pretty intense over at 1600, considering that even with the security he’s been trying to put in place, we’re still getting inside info from someone (or multiple people) working within the White House.

The New York Times reported that Spicer has been working to quell leaks regarding Russian entanglements from all angles, and it appears that he’s also now targeting internal White House communications staff, with the leaks coming out of high-level offices.

Reports have begun to emerge that he’s specifically been going through both personal and official cell phones of staffers and cracking down on who they are allowed to communicate with/what avenues they use. Further, Teen Vogue is reporting that lawyers were tasked with checking all staff devices to see if anyone was using personal messaging apps of any kind.

This is not okay.

When PressSec stress eats in anticipation of press briefings because POTUS insanity is too much you're running like a #finetunedmachine .

While it may not seem like such a big deal to some — if staffers really have nothing to hide — monitoring employees like this is a slippery slope that toes the lines of privacy invasion. It would also appear to be another troubling step toward disavowing journalists’ constitutional First Amendment rights, in an attempt to the keep the media from ferreting out potential pertinent information of interest to the American people.

Fingers crossed the White House gets this all sorted out, and soon.

What do you think about the communications crackdown in Washington? Tell us @BritandCo!