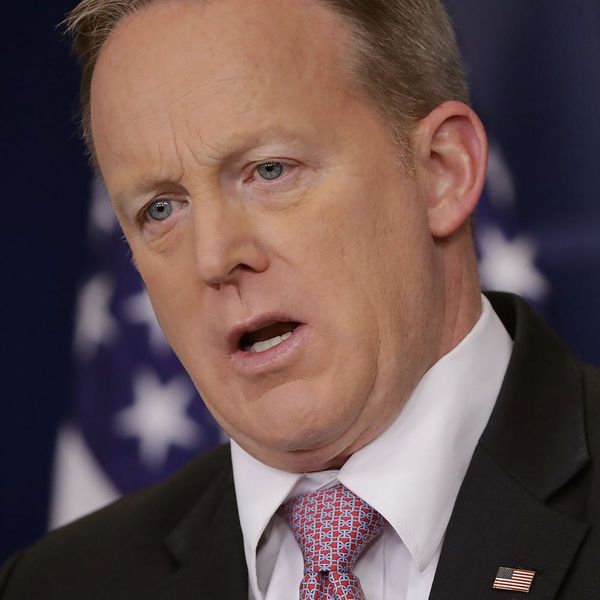 White House Press Secretary Sean Spicer is once again trending on Twitter (remember when the internet could barely handle discovering his public Venmo account?), and this time, it has nothing to do with Melissa McCarthy. At Friday’s press conference, Spicer appeared in his usual suit and tie to address the room full of journalists, except for one teeny, tiny difference that was almost imperceptible — he wore his American flag pin upside down.

Some of the journalists in attendance, including CNN (one of several media outlets banned from a recent press gaggle)’s own John Roberts, pointed out the mistake, which Spicer quickly fixed, joking, “John Roberts, always helpful with the fashion tips. Thank you, I appreciate that.”

Reporter asks if it is a distress call.

Despite Spicer’s joking demeanor about the mixup, the Twitterverse couldn’t help but wonder if it wasn’t some sort of subconscious move, with Spicer trying to send some sort of secret message of disguised distress.

Sean Spicer was spotted wearing his flag pin upside down. In maritime law, that's a sign of someone in distress. Secret message maybe?

What is he trying to tell us pic.twitter.com/KBygtvLhM4

Was Sean Spicer's upside-down flag pin an "accident"? Or a cry for help?

I'm not certain, but I'd wager Sean Spicer's upside down flag pin was a secret cry for help. @PressSec we can help, you just gotta open up. pic.twitter.com/SBZDfCrsbQ

Spicer did receive his fair share of support from folks sticking up for him (like Chelsea Clinton recently did for Kellyanne Conway) however, calling coverage of the flub ridiculous.

Sean Spicer accidentally wearing his flag pin upside down at a press briefing IS NOT news. Who cares??

I dislike @seanspicer as much as the next guy, but his pin was upside-down. Who cares?! You're telling me, you never missed a button before?

Meanwhile, House of Cards, which uses an upside down US flag as its logo, took the opportunity to do a little show promo and lighten up the situation.

Your loyalty has not gone unnoticed. https://t.co/ba1kz1yvXF

“Your loyalty has not gone unnoticed,” the show tweeted, gaining over 56K likes and 23K retweets.