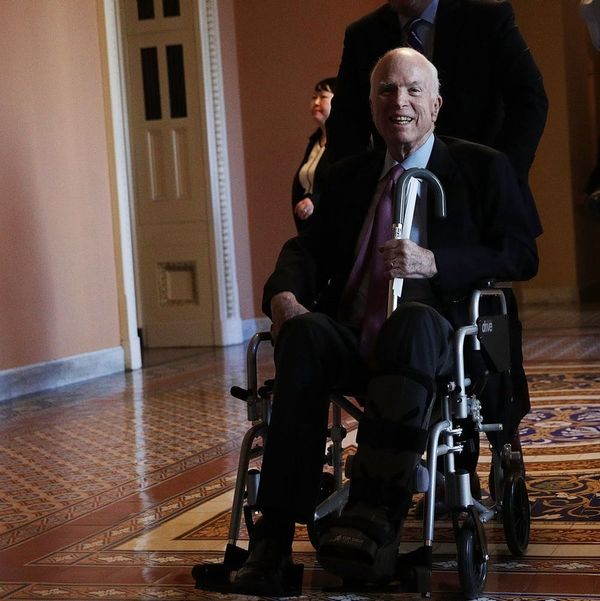 Republican Senator John McCain is at home in Arizona and will likely remain there for the rest of the year as he recovers from treatment for brain cancer. McCain will be absent from the final vote on the GOP tax bill, which is expected to take place later this week.

The 81-year-old senator is suffering from a form of brain cancer for which the median survival rate is little more than a year, reports the New York Times. He was hospitalized recently in Washington for a viral infection, but doctors say his cancer is responding well to chemotherapy.

“Senator McCain has returned to Arizona and will undergo physical therapy and rehabilitation at Mayo Clinic. He is grateful for the excellent care he continues to receive, and appreciates the outpouring of support from people all over the country. He looks forward to returning to Washington in January.”

President Donald Trump also spoke of the senator on Sunday night. “He’s going through very tough time; there’s no question about it,” Trump told reporters. “But he will come back if we need his vote.”

McCain’s absence is not expected to affect the outcome of the tax bill vote. All 52 Republicans are expected to support the major overhaul, ensuring a comfortable 52-48 margin over the senate Democrats. In the case of tie — which looks unlikely — Vice President Vice Pence can also cast a tie-breaking vote.

Back in July, McCain cast a deciding vote in Trump’s healthcare overhaul, giving a dramatic thumbs-down to the bill.

The senator’s daughter, Meghan McCain, tweeted on Sunday that her “father is doing well and we are all looking forward to spending Christmas together in Arizona.”

She also recently shared the following hopeful message during what has to be a trying time for the McCain family:

The way I see it, if you want the rainbow, you gotta put up with the rain.
~ Dolly Parton