What?! Snapchat Now Wants You to Pay for Their Best Features 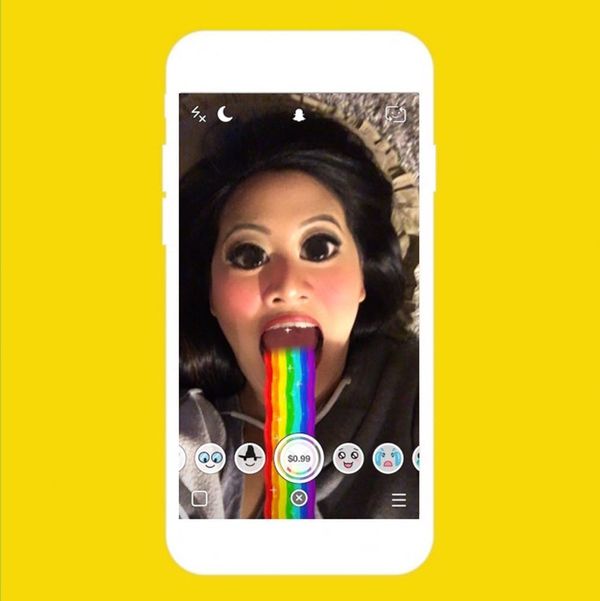 Since it first hit the scene in 2011, Snapchat has quickly overtaken the social media world — and when the app added new facial recognition lenses that allowed you to create hilariously ridiculous snaps for your friends, users were elated. Rainbow barf was one of the most popular memes of 2015. There were even YouTube makeup tutorials dedicated to helping you nail the look for Halloween. Snapchat struck social media gold with their lenses and some of their other features. And now they want to charge you money for it.

Users used to tune in daily to see which of the rotating lenses would be offered on the platform, and while Snapchat still provides seven of free lenses per day, they’ve now also implemented a “Store” that features 30 of their most popular lenses… at $0.99 each.

you have to pay for snapchat lenses now? THANKS CAPITALISM pic.twitter.com/x6uPXnBuug
— Mark Lê (@PhoMarkLe) November 13, 2015

It didn’t take long for @Snapchat to start making you pay to use those filters. Thanks for ruining a fun idea
— Aaron Hren (@Aaron Hren)1447437013.0

Most users are outraged because, frankly, a dollar is a lot to part with for the joy of using a single filter whenever you want.

This isn’t the first time Snapchat has tried to implement monetization of their very best features. They also announced back in September of this year that they would start charging for “packs” of Instant Replays. It’s a feature that’s free only once every 24-hours.

Personally, paying real money for replays and lenses feels like too much of a… fleeting pleasure.

Will you be paying to use any of these features? Tell us in the comments below!

Kimberly Wang
Kimberly Wang writes about all things pop culture, tech, style, and beauty. She's a Bay Area transplant and has an MFA in Creative Writing from Columbia University. On a sunny New York day, you can find her hanging out with her mini schnauzer Isabelle Jellybean on a blanket in Central Park.
Snapchat
Tech
Snapchat Social Media