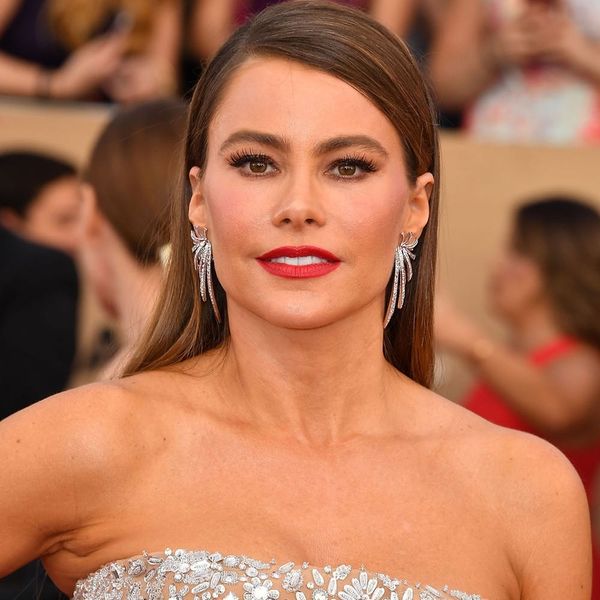 Sofia Vergara has been changing up her look as of late, opting for side-parted hair and a short party frock over her typical long waves and mermaid gowns on the SAG Awards red carpet, but the mommy-to-be just proved she’s come even farther than we ever imagined when it comes to style.

In a hilarious Throwback Thursday shot uploaded to Instagram, Sofia poked fun at some of her earlier days in showbiz, when her garb of choice was little more than a white bikini and some serious jewels. But it’s not the outfit that had us doing a double take: It’s her resemblance to a group of *very* famous sisters — a likeness even Sofia herself couldn’t deny.

“#TBT to when I looked like a Vergashian,” she wrote, along with three laugh crying emojis.

She isn’t wrong: This 2015 throwback of Kim proves Sofia could easily be one of the infamous K sisters. The swimwear! Those dark flowing locks! All Kim’s missing is a bit of beach bling (which, considering this was pre-Paris robbery, is likely to be stowed away somewhere on the beach).

Welp, we guess we know who to tap if there’s ever a movie made about their lives… (ya know, other than that brief cameo in The People v. OJ Simpson: American Crime Story)!

Are you a dead ringer for the Kardashian sisters? Tag us in your best doppleganger shots @BritandCo.

Nicole Briese
Nicole is the weekend editor for Brit + Co who loves bringing you all the latest buzz. When she's not busy typing away into the wee hours, you can usually find her canoodling with her fur babies, rooting around in a bookstore, or rocking out at a concert of some sort (Guns N' Roses forever!). Check out all her latest musings and past work at nicolebjean.com.
Kardashians
Celebrity News
Kardashians
More From Celebrity News