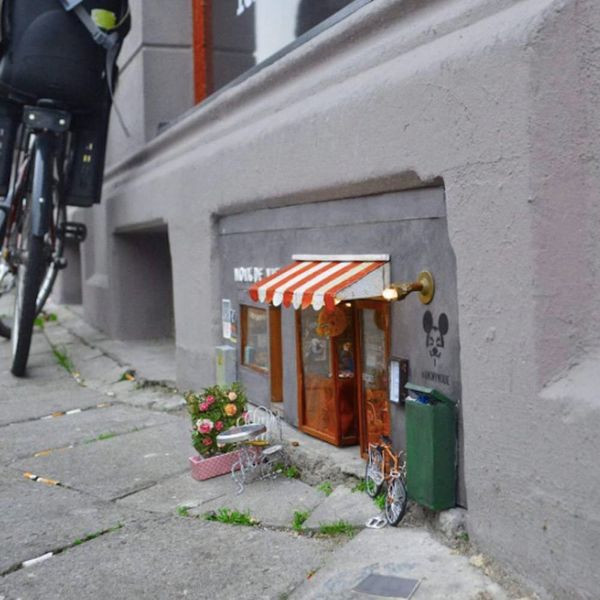 Forget Banksy — there’s a new anonymous artist (or group, rather) in town! At least in the city of Malmö, Sweden, that is. Except these guys (or gals?) aren’t creating works from Steve Jobs’ likeness: Their creations are better fit for a… well, a mouse.

A representative for the group told the Huffington Post that their works are made from things they had both lying around and collected — you know, kind of how you might envision mice to gather building materials.“The idea is for them to stick around until someone breaks them, and for them to become an organic part of the city,” the source said.

So far, so good — as they pointed out to the outlet, “Already people have started to interact with them — someone has baked miniature buns and posters have been added to the scenery.”

If you’re having flashbacks to scenes from The Rescuers, The Great Mouse Detective or Thumbelina, you wouldn’t be too far off base — the group cites Don Bluth, Disney (which has 16 live-action films coming soon!) and Astrid Lindgren as big influences.

“It’s just too darn charming to imagine a world where mice lives parallel…ours but just slightly out of sight,” the source said.

We have to say, we’re inclined to agree — these are BEYOND adorbs. Merry Christmas, Fievels!

Do you live in Molmö? Tag us in your best shots of the tiny scenery @BritandCo.

Nicole Briese
Nicole is the weekend editor for Brit + Co who loves bringing you all the latest buzz. When she's not busy typing away into the wee hours, you can usually find her canoodling with her fur babies, rooting around in a bookstore, or rocking out at a concert of some sort (Guns N' Roses forever!). Check out all her latest musings and past work at nicolebjean.com.
Art
Entertainment
Art Artist Disney