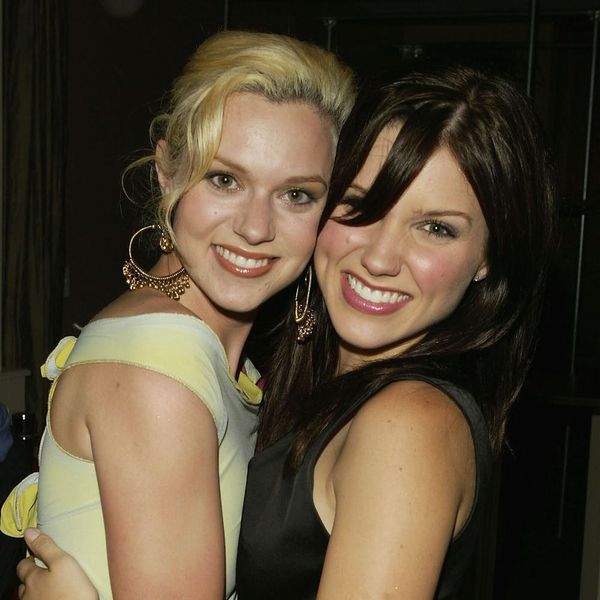 Sometimes, you meet people in life that just *stick.* Regardless of what separate paths life takes you on, neither distance, nor time can keep you apart. For Sophia Bush, that person appears to be Hilarie Burton: her former One Tree Hill partner in crime.

For six seasons, the two shared the small screen as Brooke and Peyton, BFFs with an unfortunate penchant for falling for the same guy. Though they definitely had their fair share of drama as a result, they were (almost) always there for one another at the end of the day. Their bond stuck off-screen, as well: Burton spoke to Refinery 29 back in January to explain what it was that made them so incredibly close. “I think underneath, there was an understanding between the two of us, like, ‘We’re in this to win it.’ And we’ve got all these male bosses telling us how teenage girls should act and feel, and we’ve got all these different variables coming at us. And I think now, as grown-up women, we can look back, the same way Brooke and Peyton could, and be like, ‘Man, we survived some stuff together, huh?’ And that’s a good feeling.” We’ll say!

She continued on to say, “I think when you’re in the trenches with someone, whether you agree with each other at the time or not, once you’re past it, there’s a bond you can’t deny.”

Happiest Birthday to my sweet @hilarieburton. Sister! We've been through a lot. At least 374 hair colors together. Crushes. Heartbreaks. Hangovers. Halloweens. Tears and laughter. Fear and joy. Successes and burn-it-to-the-ground failures. We've fought like rams and loved like family. It's such a thrill to be in this place with you, 14 years after we first met and danced too late in bars -- still giddy that we were finally 21 -- and to watch you shine. You're a champion for your community. An incredible mom. You're the alpaca whisperer. You're whip smart and razor sharp and deeply tender. There is no one I would have rather been on the world's most insane roller coaster with. And I'm so glad there's evidence that we both used to overpluck our eyebrows, undeniably, on the internet forever. At least we're not alone. I love you mama. #Breyton4eva #BreytonFeels #ShesMine #BetterInRealLife

Yesterday, Bush made it clear that the feeling was more than mutual when she wished her longstanding pal the happiest of birthdays with a heartwarming message that had us feeling all kinds of feels. “Happiest birthday to my sweet sister @hilarieburton,” she began. “We’ve been through a lot. At least 374 hair colors together. Crushes. Heartbreaks. Hangovers. Halloweens. Tears and laughter. Fear and joy. Success and burn-it-to-the-ground-failures. We’ve fought like rams and loved like family. It’s such a thrill to be in this place with you, 14 years after we first met and danced too late in bars — still giddy that you were finally 21 — and to watch you shine.” (Are you choking up yet? ‘Cause it gets better.)

“You’re a champion for your community. An incredible mom. You’re whip smart and razor sharp and deeply tender. There is no one I would have rather been on the world’s most insane roller coaster ride with. And I’m so glad there’s evidence that we both used to overpluck our eyebrows, undeniably, on the internet forever. At least we’re not alone. I love you mama.” Holy. Tears!

Gus is a Titanic freak, so went to Reagan Presidential Library for the Titanic exhibit. Such a great day. Birthday adventures with my boy!

A happy birthday she definitely had: Burton spent the day reliving history herself at the Reagan Presidential Library’s Titanic exhibit (her son, Gus, is a “Titanic freak”). “Such a great day! She wrote. “Adventures with my boy!”

Our hearts are officially bursting. Happy 35th Hilarie — and cheers to Sophia for being the best gal pal ever.

How do you celebrate your bestie’s birthday? Tell us over @BritandCo.

Nicole Briese
Nicole is the weekend editor for Brit + Co who loves bringing you all the latest buzz. When she's not busy typing away into the wee hours, you can usually find her canoodling with her fur babies, rooting around in a bookstore, or rocking out at a concert of some sort (Guns N' Roses forever!). Check out all her latest musings and past work at nicolebjean.com.
Halloween
Celebrity News
Halloween Instagram social media
More From Celebrity News