11 Can’t-Miss St. Patrick’s Day Parties That Are Worth the Trip 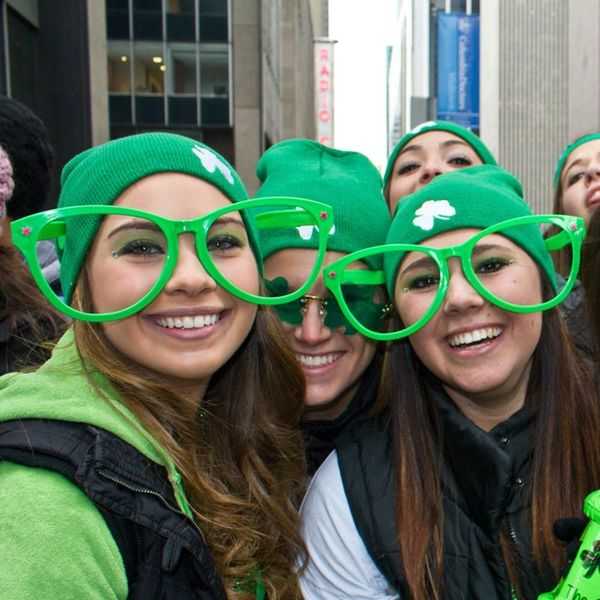 Okay, St. Patrick’s Day totally crept up on you, and you didn’t make any plans in your ‘hood to celebrate. Good news: It’s not too late to book a weekend trip. Maybe you’ve never considered traveling for a Luck-o’-the-Irish getaway, but once you pitch the idea to your #squad (by Snapchatting all the cute green DIY accessories you’ve ever made, of course), those bags will be packed in no time. Whether you’ve got wheels for a road trip or want to fly, we have a list of places both near and far to get you and your crew into the Irish celebration spirit. Scroll on, and then start booking it!

1. San Diego, CA: San Diego may not be the first place you’d think to venture off to for a St. Patrick’s Day fete, but their Shamrock Celebration in the Gaslamp Quarter hosts over 20,000 party goers each year. This epic bash has three stages of non-stop music, plus plenty of libations to keep the party going in SoCal. (Photo via San Diego ShamROCK)

2. Savannah, GA: Over 300,000 people flock to this southern town in hopes of partying like the Irish at the St. Patrick’s Day Festival, making it one of the largest crowds in the world. There are two main party hubs in Savannah: River Street and City Market. Hit up the dance parties, vendors, and a Bud Light Lima-A-Rita cabana!

4. Chicago, IL: If you’re in the Midwest, you can’t miss out on a chance to celebrate in Chicago. Each year the Windy City dyes the Chicago River with 45 pounds of vegetable dye. Check it out and then put on your best green dress to venture out on a bar crawl or celebrate with traditional Irish fare and music at Fitzgerald’s Saint Patrick’s Day Festival. (Photo via Getty)

5. Hot Springs, AK: This southern city is known for hosting the world’s shortest parade. The route is just about 98 feet, but it attracts over 30,000 spectators each year. Whether you’re looking to experience a new tradition or party with Elvis (impersonators), this is one event that’s not to be missed.

6. Running of the Micks Pub Crawl — Philadelphia, PA: Looking for an epic night of pub crawling and making new friends? Look no further than the city of Brotherly Love. The Running of the Micks is one of the best-known celebrations in Philly, with the crawl beginning at 10am each year. After enjoying your favorite Irish cocktails and fare, you and your fellow party-goers can run up the Philadelphia Museum stairs and pay homage to Philadelphia’s favorite boxer, Rocky Balboa.

7. Montserrat, Caribbean: Montserrat is an island in the British West Indies that was once known as the Emerald Isle. The Caribbean island is the only place outside of Ireland that takes the day off for St. Patrick’s Day. Their 10-day celebration is not to be missed, thanks to the Caribbean culture infused with Irish history. (Photo via Getty)

8. Boston, MA: Go for a run before you hit the Shamrock Stroll Bar Crawl, and hang around to feel the energy of a Boston St. Patrick’s Day parade. We promise your party schedule will be full.

9. New Orleans, LA: They don’t do just Mardi Gras to the max! Whether you’re looking for a day party, block party, or parade, the Big Easy will not disappoint. Both Parasol’s and Tracey’s offer up green beer, fun runs, great music, and a good time!

10. Buenos Aires: Buenos Aires hosts the largest St. Patrick’s Day street party in South America. Beginning on March 17, head to the festivities at several of their Irish pubs, where you’ll find Irish-inspired dark beers and food made the Argentine way. The next day starts with a parade that welcomes over 500,000 people to celebrate the Irish, and then the beer and food stands open to launch the street party.

11. New York City, NY: Want to cruise with an Irish-inspired beer along the Hudson River? Look no further than Coney Island Brewery’s St. Patrick’s Day Cruise. Feast on yummy appetizers and your favorite beer as you sail the night away. Looking for less booze and more tradition? Visit the Irish Art Center’s Irish Extravaganza, an event filled with authentic music, dances, and craft workshops that are sure to get you in the spirit of the holiday! Whatever you decide, the possibilities are endless in the city that never sleeps.

Looking for more ways to celebrate St. Patrick’s Day this year? Follow us on Pinterest for more party inspo!

Bianca Lambert
Bianca is an avid traveler, entrepreneur, and stationery designer at Mae B. When this Atlanta native isn't busy being a #girlboss; you can find her curled up with a glass of wine binge watching House Hunters International.
St Patricks Day
Travel
St Patricks Day
More From Travel