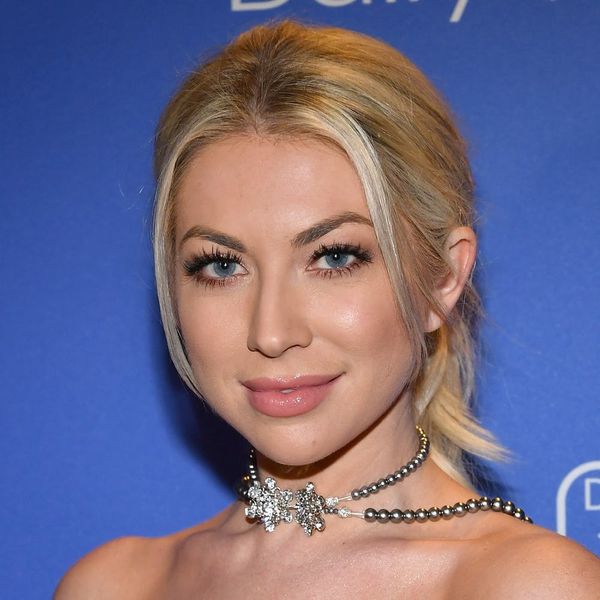 New year, new drama for reality star Stassi Schroeder! Last year, the Vanderpump Rules star found herself in hot water with advertisers over controversial comments on the #MeToo movement. Now, it seems she’s done it again after she shared a social media pic with one *very* brow-raising caption.

Taking to Instagram stories, the 29-year-old posted a mirror selfie of herself, actress Rachel O’Brien, and co-star Kristen Doute, all three dressed in black.

Going down the line, Schroeder added a caption for each girl, dubbing O’Brien’s skull cap and flannel look “criminal chic” and Doute’s V-neck and banada “Tupac chic.” It was her description of her own ensemble, however, that caused a massive uproar. “Nazi chic,” she labeled her cold-shoulder sweater and motorcycle cap.

@stassi you are officially canceled. "nazi chic" is not a thing nor ever will be. pic.twitter.com/MPgGfWxXDG

Though she reportedly deleted the image and replaced it with a new, less controversial caption reading “#Elsa-Indiana Jones Chic” which she called “an appropriate redo,” the damage was done, with many having screen-shotted the more offensive version.

Immediately, people took to social media to appeal to Schroeder’s remaining advertisers, as well as Andy Cohen, who hosts Watch What Happens Live With Andy Cohen on Bravo (the same network behind Vanderpump Rules) and Lisa Vanderpump, who is an executive producer of the show, using the hashtag “#DumpStassi.”

@Andy @LisaVanderpimp when are you going to speak up? @TheTodayShow was very prompt about Matt, you should be too. #DumpStassi

Real Housewives of New Jersey star Siggy Flicker (who is also Jewish) also weighed in on the issue, responding, “Gross,” when a fan tweeted her about it.

Schroeder responded to the snafu with an attempt at humor over on her Twitter page, but not many were laughing.

The Holocaust is hilarious, idk how people don’t get it girl!!!!

Since a pretty good chunk of the population was murdered by nazis and I suspect substationally fewer people have been killed by lasers… false equivalence.

See my grandfather with his parents? They were murdered in the holocaust pic.twitter.com/up6Ns3yUsk

Schroeder was forced to publicly apologize last year when she made comments suggesting that women were using the #MeToo movement to make false accusations against those they felt embarrassed at having had sexual encounters with.

“It was irresponsible of me to make generalized statements about a very serious topic, such as sexual harassment, as it is not my place to speak about anyone else’s experiences,” she said at the time. “I apologize. I will continue to speak my mind in my podcast, but will put more thought behind my dialogue going forward.”

So far, she has yet to issue an apology for her latest remark.

Do you think Stassi should be pulled from Bravo? Share with us over @BritandCo.

Nicole Briese
Nicole is the weekend editor for Brit + Co who loves bringing you all the latest buzz. When she's not busy typing away into the wee hours, you can usually find her canoodling with her fur babies, rooting around in a bookstore, or rocking out at a concert of some sort (Guns N' Roses forever!). Check out all her latest musings and past work at nicolebjean.com.
Celebrities
Current Events
Celebrities Controversy social media
More From Current Events