This Hijab-Wearing Ballerina Is About to Change the World 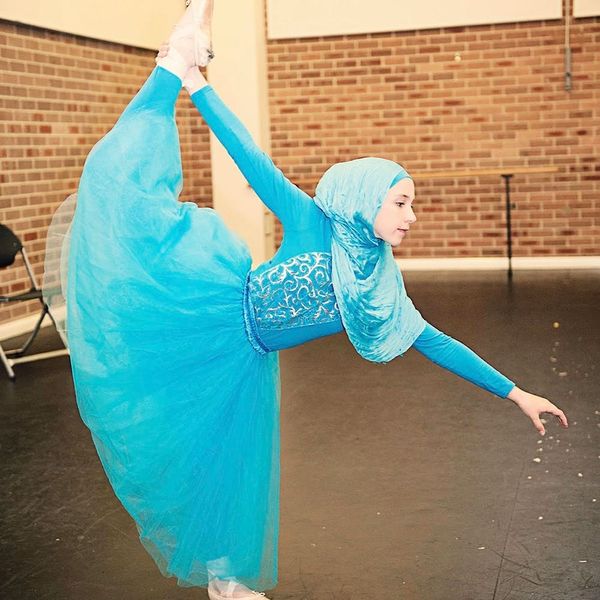 Ballet is a notoriously exclusive world. In addition to some seriously stiff competition, it doesn’t have a great reputation for being a particularly diverse industry. Which is why Misty Copeland’s promotion as American Ballet Theater’s first African American principal dancer was such a major moment in dance history. Piggybacking off this inclusive movement, Stephanie Kurlow a 14-year-old Muslim ballerina from Australia is currently running a crowdsourcing campaign which is raising money to help open a performing arts school for dancers of different cultural backgrounds.

Kurlow converted to the religion of Islam in 2010 and in turn had to stop performing after finding it difficult to find a school that would meet the needs of a young Muslim dancer. In 2012 Stephanie’s mom opened the Australian Nasheed & Arts Academy, a performing arts school that teaches ballet, martial arts and aboriginal arts classes where children aren’t questioned about the way they dress or look. But now Kurlow has plans to take her mom’s concept a step further.

Kurlow plans to use the money raised on Launch Good to pay for full-time training at a ballet school that will certify her to open her own performing arts school in Sydney. She writes, “I plan on bringing the world together by becoming the very first Muslim Ballerina so that I can inspire so many other people to believe in themselves and pursue their dreams. My dream is to train in a full-time ballet school catered for aspiring young girls who want to train 30 to 45 hours a week so they can become a professional ballerina. I want to encourage everyone to join together no matter what faith, race or colour.”

Cortney Clift
Cortney is the senior writer and special projects editor at Brit + Co. She typically covers topics related to women's issues, politics, and lifestyle. When she's not buried behind her computer you'll find her exploring New York City or planning her next big adventure.
Girlboss
Celebrity News
Girlboss
More From Celebrity News