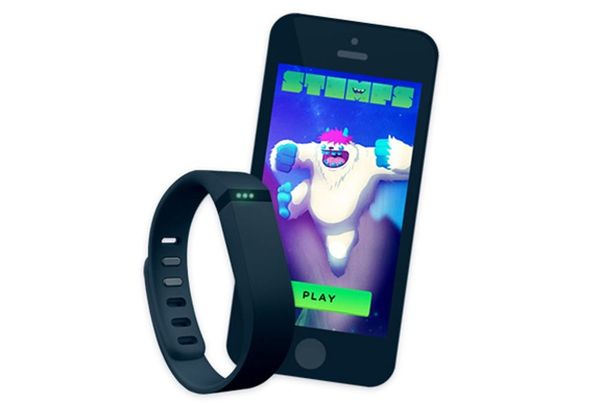 Year after year Wii consoles, Nintendo DS, now smartphones and tablets continue to kick bicycles and basketballs to the curb. And while kids may have no problem jumping through hoops virtually, they might start to struggle to do so in the real world. But any parent knows closing the laptop and forcing kids outside can often result in an ear-splitting tantrum rather than an hour of exercise. That’s why we love this new app called STOMPS.

STOMPS is a game that encourages kids to get active by offering the ultimate incentive: adventure. With games and hundreds of collectible, tradable monsters this app seems like any other video game except for one key feature: the more a child moves in the real world, the more they can do with their monsters in the virtual one.

To play you’ll need an iPhone or iPad and a Fitbit movement tracker. The Fitbit monitors your child’s physical activity and transmits that information to the app via Bluetooth. That activity turns into “energy points” you can use in the game. Kids can decide how to use their collected points by unlocking new creatures, playing new games or exploring a new level of the app. The game is all about collecting and trading monsters, each with different characteristics. Some are harder to find and require more activity, but that’s part of the challenge and the incentive to move it, move it.

Right now STOMPS is in the middle of an Indiegogo campaign and have so far only received a small percentage of their £20,000 goal. Donate £5 (about $8) to get the game early, or a little more to snag some cool merchandise. Currently the game is not available for Android phones but the creators say they plan to roll out an Android version if the campaign is successful.

Parents, kids, what’s your take on this game? Is it something you think you or your child would be interested in? Sound off below!

Cortney Clift
Cortney is the senior writer and special projects editor at Brit + Co. She typically covers topics related to women's issues, politics, and lifestyle. When she's not buried behind her computer you'll find her exploring New York City or planning her next big adventure.
Games
Tech
Games
More From Tech