Students Involved in #NationalWalkoutDay Reveal What it Means to Them 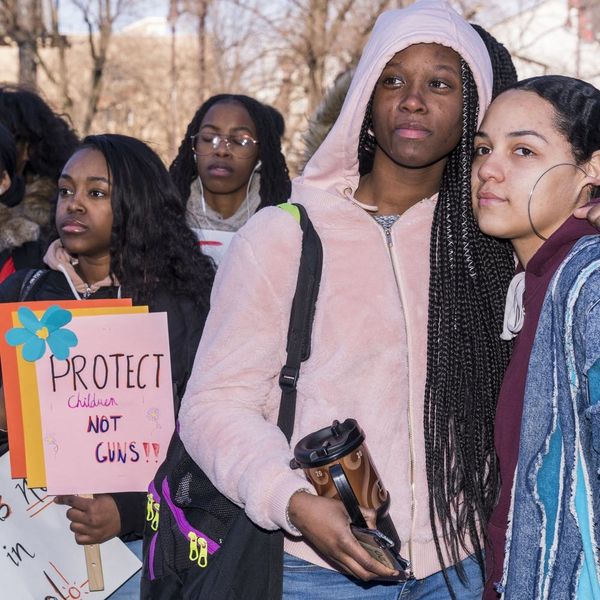 Today marks National Walkout Day; all around the country, students are walking out of school for 17 minutes in honor of the 17 people (mostly students) who were killed in the tragic shooting at Marjory Stoneman Douglas High School in Parkland, Florida last month.

Today’s walkout was called by Youth EMPOWER, the youth branch of the Women’s March. In their own time zones, students have walked out of class at 10:00 am and protested outside of their school buildings for 17 minutes. We spoke directly with some of the teens involved.

Ruby Noboa, a junior at the Urban Assembly for Applied Math and Science in the Bronx, New York City, tells Brit + Co that she opted to participate in the walkout “because too many people fall victim to gun violence.”

“In my school, we know the pain of losing someone to gun violence,” she says. “When anyone dies, a part of you goes with them,” Noboa added.

Noboa also says that she hopes the walkout makes a real political difference.

“I hope Trump really reconsiders his decisions overall, especially arming teaching with guns,” she tells us. The 11th grader feels that the president’s proposal to arm teachers as a measure of student safety is “the craziest thing that anyone could ever do.”

For Naboa, arming teachers would only “continue the cycle of violence.”

“I hope people will wake up and see that this is a problem,” she says.

Today at 10am across time zones, students across the nation are walking out of class for 17 minutes to demand Congress take action to end gun violence, one month since the shooting in Parkland, Florida. #ENOUGH pic.twitter.com/SVl9KXNeVw

The president has waffled on several gun reform policies in the wake of the Parkland tragedy, but has remained steadfast in support of arming school teachers and other school staff as a means of decreasing violence in schools. This policy is already a reality in Florida, where Governor Rick Scott last week signed a bill that allows some teachers to be armed in school. The bill also raises the minimum age required to purchase a firearm from 18 to 21, and includes $69 million in funding for mental health programs in schools.

Just today, an armed classroom teacher accidentally fired a gun and injured a student during a gun “safety lesson” in California.

Pretty remarkable over a 1,000 students sitting down and in silence for 6 mins now. #NYC School #Walkout with LaGuardia High School #Parkland #fightingGunViolence pic.twitter.com/azmqPAfwtk

Lauren Lugos, a high school student and walkout organizer from Notre Dame High School in San Jose, California wants to see gun control not only in schools, but everywhere.

“I will be walking out because I am fighting for gun control in all communities. While school shootings are unacceptable tragedies, I also acknowledge the rights of communities where gun violence is an everyday occurrence,” Lugos says.

“Everyone, regardless of where they live or how old they are, to live without fear of being shot and killed.”

Lugos also tells us that her school has been really supportive of students wanting to walk out. “We have been very fortunate to have teachers who have been supporting our request to take a stand against gun violence,” she says.

Lugos also emphasizes that while adults in the school have been on board, “all events, ideas, and organizers have been students, but the authorities at our school are allowing us to take the 17 minutes tomorrow to make our voices heard without fear of punishment for not being in class for that brief period of time.”

Students at other schools have not seen these same levels of support, however. As marches and walkouts have been planned, there have been several reports of school administrations threatening to punish students if they participate in walkouts.

In Illinois, the Hinsdale Township High School District did not give students permission to walk out of class today. According to CBS Chicago, principals at Hinsdale South and Hinsdale Central sent a letter to parents saying, “Walking out of class puts students in a potentially unsafe situation and disrupts the learning environment.”

The letter also noted that some students could face sanctions for participating in the nationwide protest. But CBS Chicago further reports that Hinsdale students defied the lack of permission from their schools, and walked out anyway.

Today’s energy has been incredible, and we’ve shown the world that we’re serious.

But this isn’t the end.

We have to keep the momentum going with the April 20th #NationalSchoolWalkout.

Next month, even more people will stand up to demand change.

We will not give up.

Students, families, and community members are also looking ahead to March 24, when the student-led March for Our Lives will be held. Then on April 20, student organizers have called for a National Student Walkout in protest of gun violence.

What do you think about the student walkouts and protests? Tell us on Twitter @BritandCo.

Elizabeth King
Elizabeth King is a politics, history, and culture writer based in the Twin Cities. She is generally pretty cranky but still enjoys traveling, music from the early 2000's, and plotting the resistance. Feel free to say hi on Twitter at @ekingc or check out some of her work at www.elizabethcking.com.
Controversy
Current Events
Controversy Politics Teens
More From Current Events