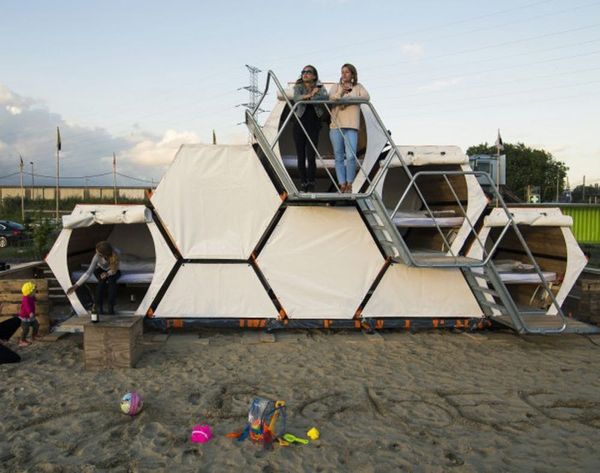 The world’s designers, makers and inventors done good this year. Between cooler-than-cool coolers, de-stressing bracelets, email overhauls and a washing machine that employs robotic fish, the Internet is flush with a year’s worth of amazing contraptions and concepts intended to change the way we live in big and small ways. These are 10 of the many, many concepts that totally blew our minds in 2014.

1. The Coolest: To date, this Kickstarter has raised the most money of any Kickstarter ever. Ever-ever. It’s a cooler that can also play music, charge your phone, blend margaritas and serve dinner.

2. Glow-in-the-Dark Highways: These smart, illuminated roads have been installed on a 500-meter stretch of highway in the Netherlands (where people are saying it feels like driving through a fairytale). They soak up the sun’s energy and could be designed to adjust according to traffic and weather conditions. A glowing carpool lane sounds pretty cool to us.

3. Robotic Fish Laundry: Industrial designer Chan Yeop Jeong came up with the concept of Pecera, a new kind of washing machine where tiny robot fish gently clean your clothes. It’s modeled after those “doctor fish” pedicures where they exfoliate your feet — except the little robots detect and remove dirt from clothes instead of calluses.

4. New iPhone Concepts: Before the iPhone 6 was released, there was a ton of speculation and predictions about what it would look like, and we rounded up a bunch of those concepts. Some are eerily close to the real thing (#8, right?), but others are just really interesting. Wrap-around touch screens, holographic projectors and more fuel your science fiction dreams.

5. Olive Stress Management Wearable: We’ve seen so many wearables this year (and many of them totally deserving of a place on this list too), but Olive stood out because healthy stress management is going to save us all. This stylish band keeps an eye on your vitals and coaches you through meditation and relaxation techniques.

6. B-and-Bee Festival Camping: This is the good kind of sleeper cell — the coolest kind of festival bunking. Festival-goers take up acres and acres of camping space, so these honeycomb hotel bunks stack on top of one another to save space. Each one contains a king-sized bed, a locker, a light and the ever-important charging outlet.

7. Giftote: This nifty contraption might change the way we give gifts. The sustainable Giftote is just a design concept right now, but we hope it’ll be available for purchase soon. It’s a gift wrap that transforms into a reusable tote bag, which would save loads of wrapping paper from hitting the garbage cans.

8. 3D Printer That Recycles Plastic Bottles: Speaking of sustainability, this 3D printer concept wowed us with its ability to recycle old plastic bottles into new things. If the concept comes to life, you should be able to throw a whole bottle in and let the machine do its work.

9. Inbox by Gmail: This is one concept that got beyond the drawing board, and we’re so, so glad. The new Gmail includes all sorts of rad features like the ability to pin messages that require your response, snooze emails ’til later and set reminders for yourself along with the emails.

10. The Undress: When we first heard about this, we were honestly kinda like, “Eh, okay. Guess some people might want this.” And then a couple of days later we had to change into a swimsuit in a tiny, filthy public restroom at the beach after waiting in line for 30 minutes. Needless to say, we changed our tune. It’s simple and genius at the same time — and the successful Kickstarter campaign means it’ll be the real thing very soon.

Did you come across any genius designs this year? Let us know in the comments.