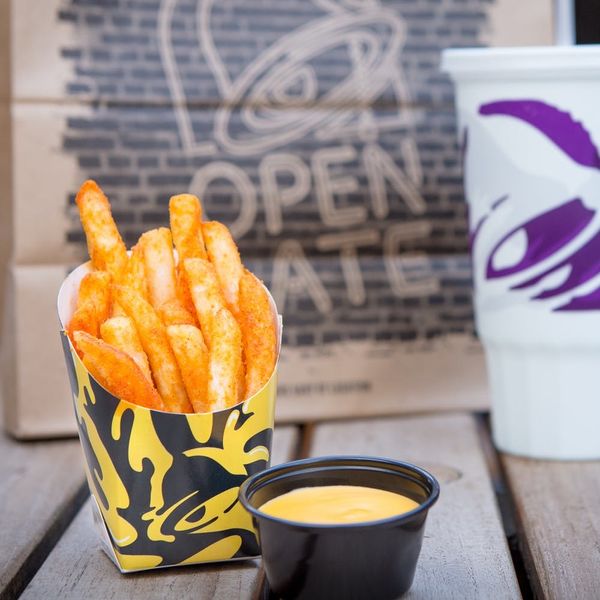 Plain french fries are *so* 2017. It’s a brand new year, and with it, Taco Bell (AKA the same restaurant that brought us the fried chicken shell) is ushering in a brand NEW way to enjoy your favorite starchy snack potato snack. Enter the #NachoFry! The fast food chain has just announced that they’ll be blessing us with their version of the crunchy, cheesy goodness at the end of this month, and what’s more? It’ll only cost you $1.

While you’ll have to wait until January 25th to get your hands on these bad boys, TB has teased that the potato snack will be “…crisped to perfection with bold Mexican seasoning.”

For a mere $2.50, you can get them served “Supreme” with warm nacho cheese, or, if you’re feeling EXTRA fancy, you can spring for $3.50 to dress them up Bel Grande with beef, pico, nacho cheese, and sour cream.

The nacho fries will join the ranks of 20 new $1 menu items Taco Bell plans to release this year. As Taco Bell’s Chief Marketing Officer, Marisa Thalberg, previously said in a statement,”We believe passionately that people should have more than just the ability to eat for $1; they should be able to feast. We are (and always have been) committed to coming up with the most craveable, creative menu items that set the bar for what great food at a great value should be.” Hear, hear! And here’s to a 2018 filled with plenty of food fiestas!

Are you tempted by Taco Bell’s Nacho Fries? Let us know @BritandCo!