The Best Streaming Device for Your Best Life 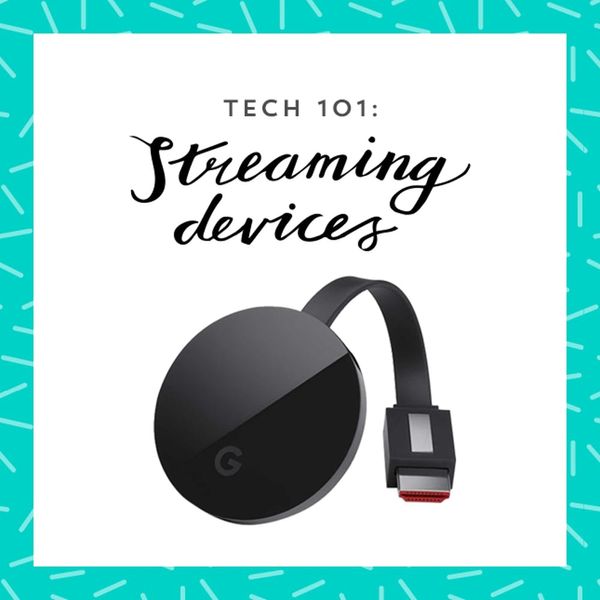 Cable TV is slowly but surely going the way of the dodo (Netflixers, unite!). That doesn’t mean people are any less interested in watching TV — people are VERY interested in watching TV — they just don’t want to pay a ridiculous monthly premium to get the few channels they actually want PLUS a bunch of crap they don’t. Thankfully, a cable subscription isn’t really necessary anymore, and there are a lot of options available for you where streaming devices are concerned. Decisions are hard, you say? We gotchu. We’ll break down the basics of each gadget and what it’s best for.

What It Is: A nifty little device that brings all your video viewing needs into one place. The Apple TV comes in 32GB and 64GB models. It boasts an entirely new interface (and iOS app to match), Touch and Siri integration (fewer swipes and taps = happier you), a remote that’s Bluetooth enabled (which means you don’t have to point it anywhere in particular) and sensors for playing games (that’s where the storage capacity is most important). The remote also allows you to control the volume on your TV using IR. You still have to point the remote at the TV when you do this, but hey… small price to pay for using only one remote.

Who It’s Best For: Casual gamers and people who want to watch Netflix, Hulu or anything in their iTunes libraries. There are also on-demand video apps like HBO and Starz, so as long as you have a subscription for those, you’re covered.

What It Is: One of the only media players that will let you watch in 4K resolution. It has access to more than 3,500 channels, which include obscure movies, original online content and special interest channels, from cooking, to cardio, to cartoons. The remote has an audio jack for when you don’t want to bother people around you, and a mic for voice search across 100+ channels.

Who It’s Best For: The people who don’t care about games but want a little of everything else.

What It Is: An Alexa-enabled streaming device. Use Alexa to fire up Netflix, Hulu, Amazon Prime Video, games and more. You can also play music, find movie showtimes and order lunch. Universal search results help you find what you’re looking for no matter which service it’s on. You can also get access to live channels with Sling TV or CBS All Access.

Who It’s Best For: Prime members (duh) and people on a budget. You get unlimited access to Prime Video and you can add premium channels like HBO and SHOWTIME without shelling out for satellite or cable.

What It Is: A little stick you plug into your TV’s HDMI port that lets you stream up to 4K quality over WiFi. It’s not limited to video, either; you can stream music from services like Spotify to your TV. You can use pretty much any device (including your laptop) to stream thousands of Chromecast-enabled apps. Fair warning though: You can’t stream Amazon Video, because the Chromecast and Fire TV Stick are competitors.

Who It’s Best For: People who like sharing what they’re looking at or listening to on their phone/tablet/laptop. It’s great for when you have your pals over and you want to share YouTube videos on the big screen.

There are a lot of options, but if you know what features you want, it’s easier to narrow it down. Now you’ll have no excuse for not being caught up on Game of Thrones (seriously, you have five and a half months to catch up).

Which streaming services do you use? Tell us @BritandCo!

Shea Lignitz
Shea can be found in the nearest bookstore or brewery, exploring the great outdoors, or blasting Led Zeppelin. She grew up in the cold and rain of Northern California's redwoods but is currently wandering around Texas.
Streaming
Most Recent
Streaming