The BritList: Chewbacca Dog, The Confetti Bar and More 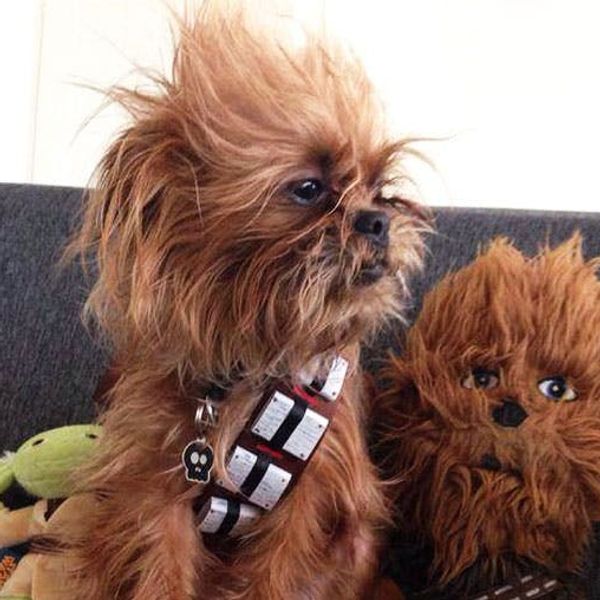 It’s a good morning for a burst of confetti, don’t you think? We feel that about pretty much every Friday, but this one is extra awesome because it’s a day dedicated to out-of-the-office creativity here at Brit HQ. That’s right — we actually do practice what we preach! Presenting our first company-wide Creativity Day, where Brit + Co’ers will spend the day learning a new creative skill, creating a brand new project or simply getting inspired, all in the name of a creative reset. Be sure to check in on Instagram @britandco to see what we’ve got cooking up! :)

But let’s get down to the real bizness now — like a dog that looks like Chewbacca, a funeral for the “Like” and a petition for cats and lasers.

1. The Confetti Bar: Our new favorite customization category? Confetti!! This cheeky shop lets you choose from dozens of confetti concoctions, and even lets you design your own.

2. Hipster Glasses Stamp ($12.50): Nerd alert! Add a little hipster whimsy to every card you send out. This could also be a fun way to customize business cards.

As she describes, “We got hitched in Las Vegas last year and I’m sure we’re happier than most newlyweds. People might think I’m crazy but my flat-pack R-Patz is the closest I’ll get to the real thing and he’s the one for me.”

5. Chewbacca Dog: Also known as the greatest doppelgänger/Halloween costume ever.

6. Blue Geometric Bike Seat Cover ($12): How cute is this? Such a fun change from your boring, tattered bike seat. Plus, it’s water resistant!

7. A Petition for Cats and Lasers: High school senior Draven Rodriguez might win for best (fine, at least most LOL-inducing) petition we’ve ever heard of. He posted a petition asking his school to include a photo of him holding a cat against a laser background in his class of 2015 yearbook. #memesFTW

8. The Dancing Traffic Light: This cool project is all about getting folks to stop ignoring the Don’t Walk signal, and instead, enjoy it!

10. A Funeral for the “Like”: What. Last weekend in Amsterdam, the Like was laid to rest. As described by our friends at Neatorama, it’s a symbolic rejection of substituting online actions for offline activity. The organizers of the funeral reject the notion that clicking on a Like button constitutes doing anything productive. Fair enough…!

11. Olive Beaded Necklace ($24): Is it weird that this necklace really makes us want a bowl of buttery Castelvetrano olives… like, now?

Anjelika Temple
As Co-Founder and Chief Creative Officer of Brit + Co, Anjelika Temple brings her voracious consumption of all things creative and colorful to DIY projects, geeky gadgetry finds and more. When she's not DIY-ing her heart out, you'll find her throwing dinner parties with friends or adventuring with her husband David, their daughters Anokhi and Indira, and their silly dog Turkey.
BritList
Home News
BritList
More From Home News