The Cool New Tats Your Fave Stars Have Gotten This Year 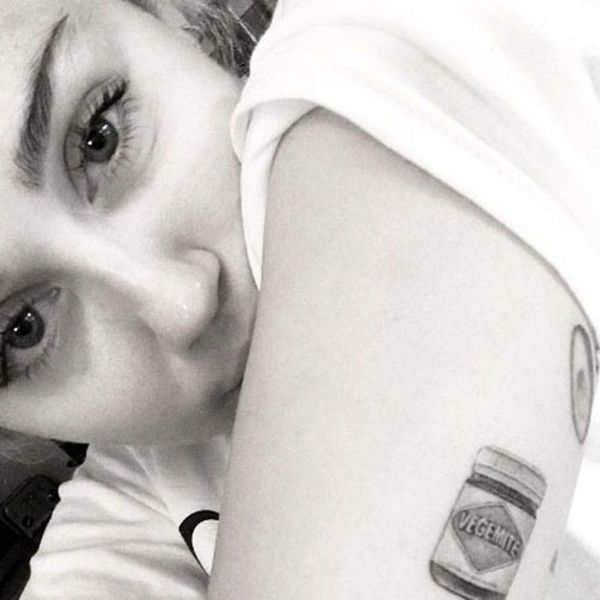 Tattoos are huge right now: Couples are opting for matching wedding ring tattoos and Pinterest is overrun with inspiration. Employers are even coming around to the idea of inked employees, though some are acclimating faster than others.

@mileycyrus don't play when it comes to #vegemite 🍴 #halfneedle

1. Miley Cyrus: Miley’s a well-known fan of tattoos, and has been adding to her collection for some time. This latest one is apparently a nod to her beau Liam Hemsworth’s fave Aussie snack.

2. Paris Jackson: Another avid fan of tiny tats, Paris memorialized several of her favorite musicians on her right hand, including her dad and the recently deceased icon, Prince (RIP).

The Kingdom of Kush or Kush was an ancient African Nubian kingdom situated on the confluences of the Blue Nile, White Nile and River Atbara. (1050/1070 B.C. - 350 A.D.) but at the height of its power in about 700 B.C. the Kingdom of Kush controlled the entirety of Egypt itself with Kushite Pharaohs ruling. What I love most is it's history's of female rulers!! In school, we very rarely ever learn about female rules and never about African rulers. Amanirenas was one of the most famous Queens of Kush. She reigned from about 40 B.C.E. to 10 B.C.E. She is one of the most famous kandakes(means queen really but that was the title back then), because of her role leading Kushite armies against the Romans from in a war that lasted five years 😱 (27 BCE - 22 BCE). She was able to communicate a peace treaty that favoured the Kushites, granting them land and an exemption from future taxation. She has been described as brave, with one eye #MyAncestors P. S. "Egypt" is a Greek word meaning black, hence the rename when they invaded. 😳🤔😍✨👑 (shoutout to @threekingstattoo in Brooklyn ✍)

3. Keke Palmer: Kush was a Nubian kingdom in Africa on the Nile, as Keke points out in the description of this photo on Instagram, and one that had a succession of female leaders. Keke writes that she got this tattoo to remember that history. Talk about a seriously inspiring piece of body art!

Solidarity: "Noun. Unity of feeling of individuals with a common interest or purpose." Individually, we have rights and unique gifts. Together, we have strength and powerful harmony. I have wanted to get this tattoo for a long time. The tragedy in Orlando devastated me and reminded me that every moment of our lives is precious. Every human is precious. Love hard. Live gracefully, authentically and with conviction, respect, purpose and compassion. Together we achieve what is impossible to those who stand alone. Those of us who embrace and respect freedom stand together, progress together, celebrate together and grieve together. You are not alone. ❤️💛💚💙💜

4. Kelly Osborne: Following the Orlando nightclub shooting in June, Kelly had the word “solidarity” inked into her head as a lasting reminder of her stance toward the LGBT community.

Tannara Yelland
Tannara is a freelance writer and editor, an occupation perfectly suited for her affection for drinking too much coffee and keeping odd hours. She usually writes about politics, economics, and pop culture. Some day she will put to use the hundreds of hours she's spent watching Say Yes to the Dress and write THE definitive analysis of the show.
Tattoos
Makeup
Tattoos
More From Makeup