The Empowering Way Families in ICE Detention Are Advocating for Themselves 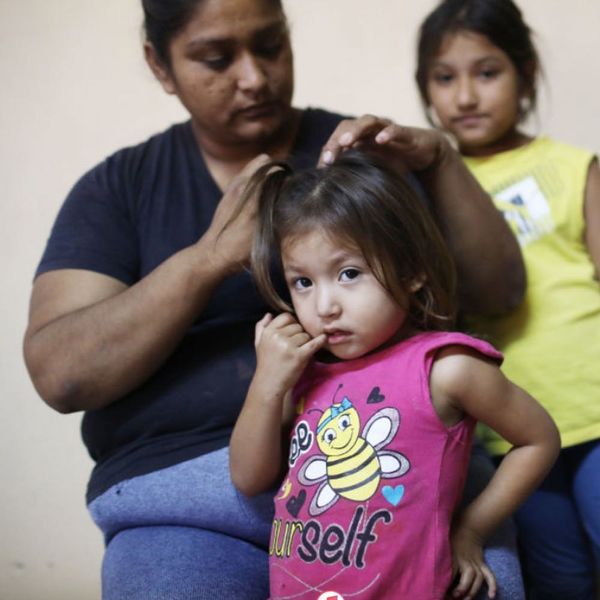 As support of immigrants in ICE detention grows in the wake of the Trump administration’s “zero tolerance” policy, protests are forming both outside and inside detention facilities. As immigrant rights activists have staged marches, protests, sit-ins, and occupations, and for a week now, strikes have been called among ICE detainees and other incarcerated people to demand better conditions and treatment.

Ahead of the July 26 deadline for the administration to reunite separated immigrant families, detainees at an ICE detention facility in Bristol County, Massachusetts went on hunger strike in protest of their living conditions; WGBH in Boston reported that detainees are complaining of “inedible” food and a lack of medical care. Then last week, prisoners in the Bristol County House of Corrections started a hunger strike in solidarity with immigrants held in ICE detention, WGBH reports. On Tuesday, July 24, 71 prisoners at BCHC refused to eat dinner, and an additional 35 joined in on the following morning by refusing breakfast.

At the Port Isabel Service Processing Center, an ICE detention facility in Texas, mothers staged a hunger strike in mid-July as well. The Intercept spoke to several women held at PISPC, who said that they were desperate. Reporter Debbie Nathan saw meals served to immigrant detainees that she described as seriously inadequate: a standard lunch is “two slices of white bread with two slices of deli meat without condiments, a small apple, and a six-ounce bottle of something that resembled Kool-Aid.” Detainees also said that guards did not allow them to see news related to immigration.

Dads and their kids are now on hunger strike in Texas, as well. According to statements from the immigration legal services non-profit RAICES, 500 dads and their kids in the Karnes Detention Center in Karnes City, Texas are also now on hunger strike. Though these detained fathers have been reunited with their sons, they are striking to demand that the Trump administration speed up their cases so they can get out of detention.

-LISTEN-
Today fathers w/ their sons who are reunited but still DETAINED at Karnes Detention Center continue to strike demanding their freedom. Many were lied to about signing reunification paperwork that turned out to be deportation agreements. #KarnesStrike #DadsDemandsJustice pic.twitter.com/V0gIPcChuk

A detained dad in Karnes named Jorge told RAICES that the facility is holding 500 fathers and 500 sons. “We are going on hunger strike and we are not going to obey any of their orders… we want to be released because we are desperate. Lots of the fathers are desperate,” Jorge said.

Hunger strikes are nothing new in ICE detention facilities. In fact, Karnes was the site of another hunger strike in 2015, under President Obama. Mothers detained with their children at Karnes also held two hunger strikes in April 2015 to demand the release of mothers who were detained while seeking asylum. Asylum-seekers have a legal right to pursue asylum claims, yet many asylum-seekers were then, and still are now, forced into ICE detention.

And as new hunger strikes are launched, a group of asylum-seekers in California are suing ICE over abuse they endured from guards during a hunger strike last year. Detainees at the Adelanto Detention Facility went on hunger strike last year in protest of a lack of clean drinking water, inedible food, and “unsanitary” clothing, Democracy Now! reports. The plaintiffs in the lawsuit claim that guards physically assaulted them and put them in solitary holding during the strike.

At the kickoff #Hungry4Justice hunger strike, activists in Oakland aren’t feeding their stomachs, but they’re feeding their SOULS

Learn more about this NATIONAL action coming to a city near you & get involved! https://t.co/dqCwuoRMmi#FamiliesBelongTogether pic.twitter.com/fMYKvk4WBO

As hunger strikes spread inside ICE detention, organizers and activists on the outside are also joining in a show of support of detainees. Inspired by the moms striking in Port Isabel, the immigrant rights protest group Families Belong Together organized a series of rolling hunger strikes in solidarity with parents striking in ICE detention. Families Belong Together tells Brit + Co that they’re hoping activists around the will organizer their own three-day hunger strikes.

Elizabeth King
Elizabeth King is a politics, history, and culture writer based in the Twin Cities. She is generally pretty cranky but still enjoys traveling, music from the early 2000's, and plotting the resistance. Feel free to say hi on Twitter at @ekingc or check out some of her work at www.elizabethcking.com.
Activism
Empowerment
Activism Immigration
More From Empowerment