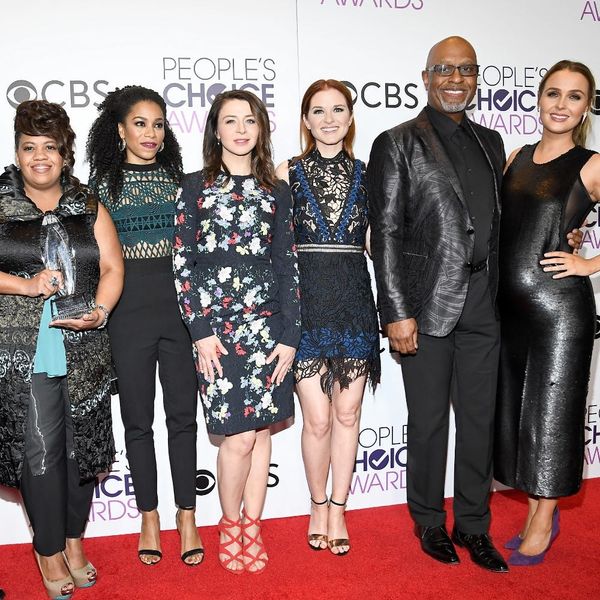 Beyoncé’s pregnancy announcement not only took the world by surprise and lit the internet on fire, but it’s already spawned countless comparisons, think-pieces and now, (natch), a parody. The folks over at Grey’s Anatomy may face more than their fair share of serious situations on the medical drama, but those behind the scenes — for example, mamas Jessica Capshaw and Caterina Scorsone — definitely know how to get into the expectant vibe, Bey-stylez.

With the help of the series’ star Ellen Pompeo, preggo cast-member Camilla Luddington (who you might know better as Dr. Jo), stepped in — or rather, kneeled — to take the place of Queen Bey within a giant floral display and wearing the requisite burgundy bra and blue panties.

Though Camilla is obviously unsure about the whole setup at first (“Don’t you think we’re taking this a little too far?”), Ellen assures her that it’s totally fab. Really, when else will you have the chance to be pregnant at the same time as Beyoncé?!

As for the end results, here’s Beyoncé’s version…

And here’s the version from the Grey’s Anatomy cast…

Arguing over whether this is really necessary..... @ellenpompeo

Too perfect! Too funny!

What do you think about the Grey’s Anatomy version of Beyoncé’s pregnancy pic? Tweet us @BritandCo!

Desiree O
Desirée O is a ‘Professional Bohemian’ who loves anything and everything related to the arts, entertainment, and pop culture. She ADORES being a ‘Newsy’ for Brit + Co, covering all of the latest tidbits of awesomeness that you want to read about. When she’s not writing, she’s either making messy art, going on long adventurous walks with her camera, or poking around over at bohemianizm (http://www.bohemianizm.com/). You can find out about Desirée O and her work at http://DesireeO.com/ or follow her on Twitter @DesireeO.
Beyonce
TV
Beyonce Pregnancy
More From TV