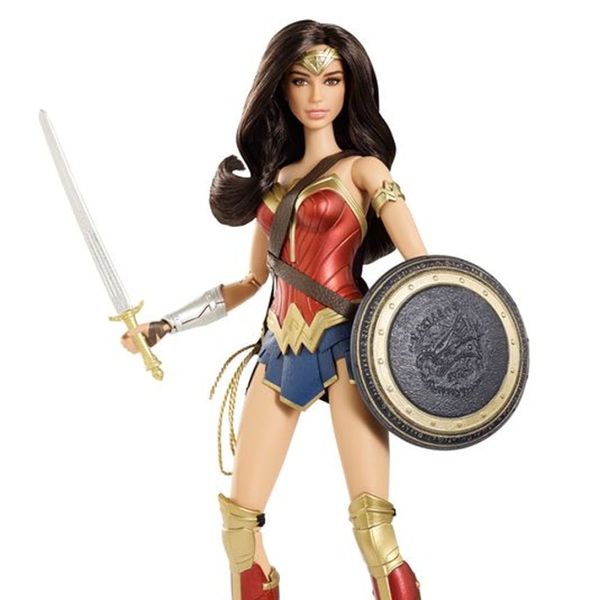 Wonder Woman has always been popular with superhero-loving boys and girls, but with the new live-action movie storming onto screen, Gal Gadot has brought the character to life for an entirely new generation. With dolls (or action figures) being scheduled to coincide with the film’s popularity, they’re in fact so unexpectedly gorgeous, we have no doubt that plenty of adults will want them.

Mattel and Warner Bros. have teamed up to create a line of Barbies inspired by the Amazon-filled franchise, which is coming to theaters June 2. Going on sale nationwide (in stores and online) April 29, each will cost $45, but are surely worth every pretty penny.

You could opt for Diana/Wonder Woman & Steve Trevor (Chris Pine)…

…or Antiope (played by Robyn Wright)…

…or even Queen Hippolyta (AKA Connie Nielsen).

But we’d have to say Wonder Woman herself would be hard to pass up.

Each with stunning detail, yet totally staying true to Barbie’s signature style, the only problem we’re going to have is letting the kids play with them when we’d rather keep ‘em for ourselves.

What do you think about the Wonder Woman Barbie dolls? Let us know @BritandCo!

Desiree O
Desirée O is a ‘Professional Bohemian’ who loves anything and everything related to the arts, entertainment, and pop culture. She ADORES being a ‘Newsy’ for Brit + Co, covering all of the latest tidbits of awesomeness that you want to read about. When she’s not writing, she’s either making messy art, going on long adventurous walks with her camera, or poking around over at bohemianizm (http://www.bohemianizm.com/). You can find out about Desirée O and her work at http://DesireeO.com/ or follow her on Twitter @DesireeO.
toys
Pop Culture
toys
More From Pop Culture