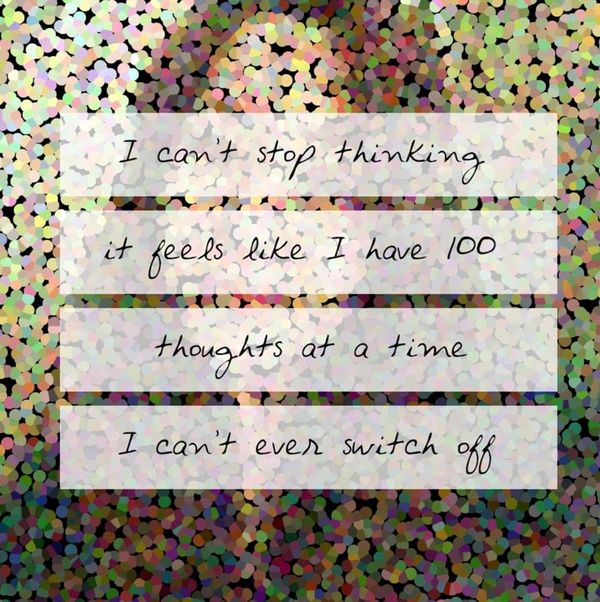 All too often, the term “OCD” conjures up a vision of someone furiously cleaning their house until every last surface has been polished. Less often are the extreme rituals and debilitating thoughts mentioned. Though they are a lesser known side of the illness to the general public, they can become a massive and daily battle for those affected. It’s also exactly why the eye-opening website The Secret Illness was created.

While scrolling through The Wall, you’ll find submissions that confess thoughts like, “Did I unwillingly commit a crime or wrong in the past for which I will be horribly punished for?” “I used to take my hair straightener to work so that I could always check they were off.” And even “Don’t tell anyone what goes through your mind in case they lock you away.”

Becca tells us she and Liz originally planned to make a documentary about OCD together but after talking to a few people, they realized this really needed to be something that came directly from the source. She says, “The things they were telling us were so fascinating or heartbreaking or really uplifting. We just didn’t feel like a documentary would do it justice. That’s why we launched the wall.”

Becca also adds that her mum played a large role in the manifestation of the project. “My mum has OCD and she didn’t get diagnosed until she was quite a bit older. I think in hindsight I realized how tricky life had been for her when we were younger. If I’d known or if she’d known, things could have been much easier.”

Liz and Becca’s project has struck a chord not only across the UK but with people all over the globe. When they first launched in August of 2015 their goal was to get one submission up a week. They were quickly getting enough to put one out a day and they now have more than enough for the coming months. While it has become a lifeline for those directly affected, they’re not the only group Liz and Becca are looking to reach. Becca says, “We want people to have somewhere that they can see other people in a similar situation and know that they’re not alone in this and there is a community that understands. However, we also want to raise awareness and I think it’s really important to us that people who aren’t living with OCD can go on the website and read about it.”

With a lot of buzz currently surrounding the project, it’s easy to write it off as another cause having its moment in the sun, but they’re looking to reach beyond virality and instead to create some sort of lasting change. Becca says, “With a lot of the viral campaigns [think: the ALS Ice Bucket Challenge] you see there is a great buzz about them and you’re really interested but when that buzz has gone, do people really remember what cause it was for? Did they learn about it? We want to change the stigma and have people really understand what OCD is rather than get behind it and forget again.” To keep the project’s momentum and education going, Becca and Liz are also working curating short films and various other artworks, all of which are co-created by people with OCD.

To anyone out there currently struggling with OCD, Becca has this to say: “You’re not alone. There are so many people out there who feel very similar right now and there are amazing organizations, treatments and support systems. If you can bring yourself to talk about it with whoever that might be, there is hope and there is a lot of help. OCD wants us all to keep very quiet. It likes you to stay quiet and not talk about it. It’s a bully and it wants you to think it’s in control and I think speaking about it can be a huge first step.”

(Photos via The Secret Illness)

Cortney Clift
Cortney is the senior writer and special projects editor at Brit + Co. She typically covers topics related to women's issues, politics, and lifestyle. When she's not buried behind her computer you'll find her exploring New York City or planning her next big adventure.
Art
Health
Art