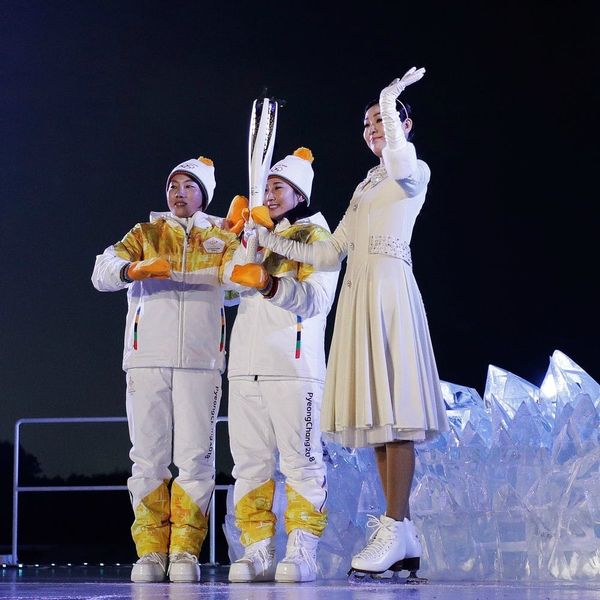 In a Winter Olympics opening ceremony filled with so much symbolism, many may have missed the biggest moment of the entire show — the symbolic dual torchbearers from North and South Korea sharing the honor together. Park Jong-ah of South Korea and Jong Su-Hyon of North Korea shared the honor of handing the torch to Korean Olympic hero Kim, Yuna. Their story is one that many in Korea hope for: unification of the north and south nearly 70 years after war divided the country.

#YunaKim initiative to hold olympic torch all together with both South and North Korea athletes. So proud of her courage, so moved by this majestic moment #PyeongChang2018 #EpicWin #ThisIsHistory #WinterOlympics2018 #NorthKorea #SouthKorea pic.twitter.com/p5KxtwCDKn

The two hockey players are the most decorated on the unified Korean women’s hockey team, with Park as the team captain and Jong being the highest scoring North Korean player in recent memory. Their co-handling of the torch, and their symbolic moment with Korean idol Kim was one of the most exciting moments for many in Korea and abroad.

GAGOOOO THAT WAS THE PRETTIEST WINTER OLYMPIC OPENING IVE EVER SEEN

SORRY VANCOUVER AND SOCHI BUT SLANSJSJSSNSKA

Torch bearers from North and South Korea carrying the flame together. I'm not crying, you're crying! #openingceremony #PyeongChang2018 #CBCOlympics

Since the end of the Korean War in 1953, the Democratic People’s Republic of Korea (DPRK or North Korea) and the Republic of Korea (ROK or South Korea) have been in a tense back-and-forth. The US military has set up semi-permanent shop in the south, and with rising international tensions, specifically between the Korean leader, Kim Jong-Un and President Donald Trump, the nations are a hotbed of action these days.

During the opening ceremony, VP Mike Pence was in attendance, and seated behind him was North Korean leader Kim Jong-Un’s sister, who many consider the “Ivanka” of the DPRK, the symbolism of which was something that wasn’t lost on many.

While political tensions seem to be on the rise more than ever before, it’s the athletes who are sharing their time in the spotlight to help pave the way to better communication, and, in the hopes of many Koreans, eventual reunification.

What did you think of the opening ceremonies? Let us know @BritandCo!

Kat Armstrong
Kat has been a writer, social media maven and mom for longer than she's willing to admit. She's also spent time in front of and behind the camera, interviewing celebs, politicians and acting as a producer for fashion and artistic photography shoots. When she isn't writing for various orgs and publications, she's hanging with her kids, husband and French Bulldog, Peter, in Toronto, Canada.
Olympics
Current Events
Olympics Politics
More From Current Events