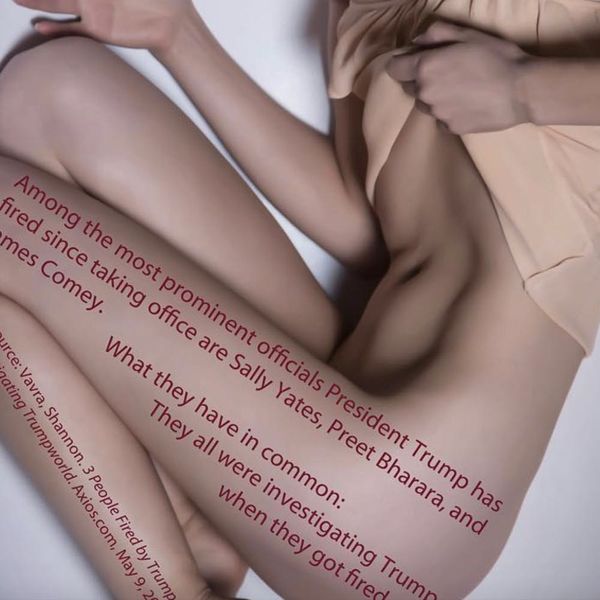 Ever since Donald Trump has taken office, folks across the United States have been finding ways to show off their civic responsibility and, well, fight the power. One recent example is the cheeky Instagram account “ISO Models, Facts & Sources” which offers (tastefully censored) nude photos mixed with a slice of political fact-checking.

The account was started by activist and writer Amanda Henneberry. In the year leading up to the 2016 presidential election, Henneberry worked as a magazine fact-checker, where her job was to verify whether writers’ claims were accurate and true. Meanwhile, as the presidential campaign ramped up, she couldn’t help but notice that it seemed like many people didn’t care whether or not candidates like Trump were telling the truth. At the same time, as a young and feminine woman, she noticed that people often seemed more interested in her body than her brain.

“My sense of personal disillusionment was amplified by the American public’s election of an unqualified, unfit man who’d bragged about sexually harassing women,” she explains of the relationship between facts and her own sexualized body, and so she took action to create the Instagram account that would share nudes and plain ol’ facts.

Since the launch of the account in January, Instagram has pulled down the account twice due to policy violations, only to reinstate the images within 48 hours. The account solely runs on submissions, which have so far been photos and quotes submitted by friends of Henneberry.

Henneberry hopes that this account will hit Trump and his followers right in their weakest spot: his stance on women’s issues, women’s rights, and women’s bodies. But she’s trying to do it with humor.

“I’m hoping that it reaches and provides a good laugh for Americans with a similar sense of disillusionment and holds a mirror to cultural behaviors,” Henneberry says.

While “ISO Models, Facts & Sources” may be an unconventional medium for political activism, it’s starting a dialogue, empowering women sexually and politically, and demonstrating the power of body positivity and awareness.

“While the shock and drama of politics seem to have become more attractive [and damaging] in much of America than honest reflection on humanity and balanced logic — I don’t want to tell anyone how to feel about this project, but do hope it provokes thought and reflection on how information is dispensed and on the ways we continue to view and abuse femininity as a culture,” she says.

All you activists: How do you get your message out there? Tell us @BritandCo.

Amanda Scriver
Amanda Scriver is a passionate storyteller and body image advocate based out of Toronto, Canada. When she isn't writing for various publications, she finds time to Keep Up With The Kardashians while partaking in life's greatest pleasure: the chip buffet. Don't ask her what her favorite restaurant is, it's complicated
Feminism
Politics
Feminism Instagrams to Follow Ladies First Politics