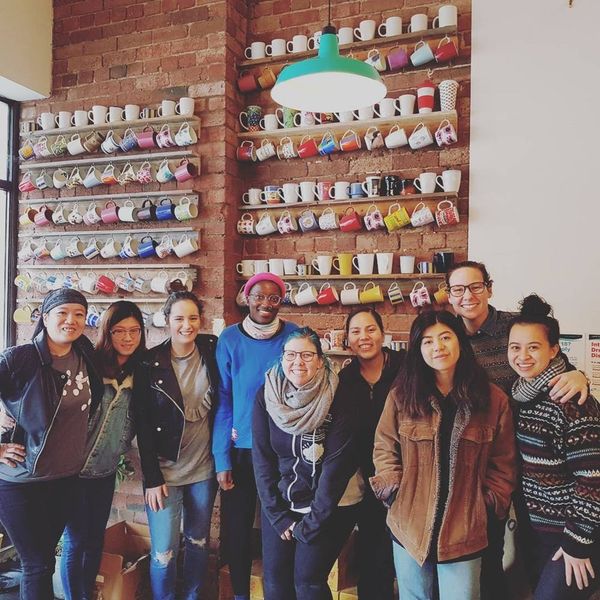 The gender pay gap isn’t expected to close in the US for over 50 years. Things aren’t much different in Australia, where Equal Pay Day was recently observed to acknowledge the country’s estimated average 15.3 percent pay gap between the sexes. On that note, a new cafe is taking matters of equal pay into its own hands by implementing an 18 percent “tax” for male customers.

Handsome Her is a woman-run (and woman-oriented) cafe that opened in the Melbourne, Australia suburb of Brunswick in August. Their chalkboard clearly outlines the unconventional house rules: 1. Women have priority seating. 2. Men will be charged an 18 percent premium to reflect the gender pay gap as of 2016. 3. Respect goes both ways.

It’s the second item on their list of rules that’s gotten the most attention. Handsome Her owner Alex O’Brien tells Brit + Co in an email that the gender tax was decided on for a few reasons: To raise funds for various women’s charities, to establish the cafe as a women’s space first and foremost, and to set an expectation for conduct. The cafe was fully aware of the controversy and conversation that might ensue, but the level of hate from some of its detractors was on another level.

“The most surprising response has been the level of vitriol from some men online,” O’Brien said. “We didn’t expect so many men to react so badly to an initiative which overall is designed to do good and raise money for a worthy charity.”

This is one of our employees Daryn. Daryn hasn't had paid work in quite a while - he's spent the last 15 years volunteering with kids with disabilities, riding his bike around town and growing his own food. He's helped us with Handsome Her right from it's concept stages - even suggesting that we charge men more for our theoretical pool table (which we still haven't sourced). Daryn came onboard as an employee last week and has offered to donate 18% of his income (his first income in 20 years) to our chosen charity. What a bloody legend. With amazing supporters like Daryn we have raised $480 in just ten days for Elizabeth Morgan House Aboriginal Women's Service Inc. ✌️ #handsomeher #womentothefront #womentakingnames  #whoruntheworld #feminist #feminism #yesallwomen #womensrights #feminista #tothegirls #handsomecoffee #brunswick #brunswickcafe #specialtycoffeebrunswick #veganmelbourne #vegan #vegansofmelbourne #melbourneeat

But it wasn’t all bad: A post on Handsome Her’s Facebook page detailed some of the positive responses the gender tax received. One woman brought her daughters in to thank the cafe for what they were doing, and some men were more than happy to pay a premium — and then some.

“We’ve had men travel across town to visit us and pay ‘the man tax’ and throw some extra in the donation jar,” the post read. The donations, O’Brien said, go to the local Elizabeth Morgan House Aboriginal Women’s Service, among others.

Handsome Her also leads a number of other initiatives to empower women, from networking events for local female business owners to advanced management training for its employees, to hosting feminist discussion panels, and more.

Ultimately, O’Brien hopes Handsome Her is a community catalyst for working on behalf of women and other marginalized groups, and hopes to inspire thought and conversation beyond just what’s on the chalkboard.

“Handsome Her is for the misfits of Melbourne to be themselves,” O’Brien says. “It’s for the LGBTIQ community to find refuge. It’s for women who don’t want to put on makeup or bleach their lip hair. It’s for any woman to disappear into and escape the unforgiving male gaze which penetrates the world we live in and holds women to the highest of standards.”

“I didn’t have a space like Handsome Her growing up,” says O’Brien. “I wish I had.”

What do you think of Handsome Her’s “man tax”? Let us know @BritandCo!