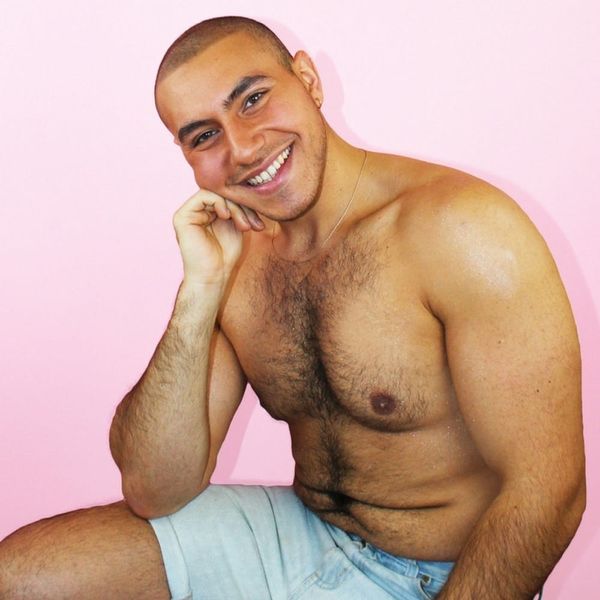 The body image issues faced by men can be much different from those of women. For one, men face pressure to perform “manliness” — that is, heteronormative ideals of masculinity should look like. This is why Mina Gerges, 23, took to his Instagram account to break down the toxic narratives in the media and pop culture that dictate what men’s bodies should look like. Along the way, he’s learned to love his body, too.

This is the scariest yet most empowering post I've ever made. I’ve struggled with my weight and body image my whole life. I grew up surrounded by unrealistic pictures of men and women that convinced me that I have to look like that to be considered attractive and desirable. Especially as gay men, where unfortunately so many of us struggle with achieving that unrealistic standard to feel beautiful. Trying to achieve this made me develop an eating disorder when I was 20 - I would starve myself, weight myself every morning, spend 3 hours at the gym and ran 10km every day, and hated myself if I ate something “unhealthy”, and still, never found happiness or satisfaction. Now at 23, I’m finally confident and comfortable in my skin, and she’s glowing ✨ The stretch marks and love handles I was bullied for are the very thing I feel empowered by now. I know I’ll never look like the dudes we see in billboards and fashion ads, and that’s okay because I’m still cute AF with my cute little belly and squishyness. Learning self love and being confident is such a beautiful thing, and I’m so lucky to be able to have this platform to share it with you guys. ❤️

Gerges tells us that his body has always been the focus of his Instagram account, but not always in the same way. He first reached viral stardom by recreating red carpet dresses out of dollar store materials; you may remember seeing his version of Beyoncé’s 2016 CMAs red carpet dress, which Gerges made using marshmallows and Froot Loops. But as his photos gained popularity, the focus in his comments shifted from his costumes to his weight gain.

“It got to the point where I hated posting on social media because it made me extremely anxious,” Gerges explained. The negative attention led him to take an eight-month break from Instagram. The time away from social media gave him a chance to rebuild himself inside-out, and to really learn to love his body.

When he felt ready to step back onto Instagram, Gerges decided he wanted to use his platform to address what body image could mean not just for him, but for others.

“We’re conditioned to keep quiet about these very real things that so many of us go through because it’s not ‘manly’ to be vulnerable,” Gerges explains in an e-mail exchange with Brit + Co. “There’s this assumption that somehow, men aren’t affected by the unrealistic male beauty standards we’ve been spoonfed since we were young and I think it’s time to change that, to show that you can love your body and feel confident and attractive despite not having that chiseled body.”

I haven't posted a "normal" pic on here in 4 years but since February I lost 50 pounds, cut out so many toxic garbage people from my life, and have become the happiest I've been my entire life after being depressed for the last 3 years. It feels incredible to be happy again. A fucking glow up 💅🏽👸🏽 And I'm so excited to share this journey with u all 💝

In a large national study of college students, over two percent of men reported having an eating disorder. Gerges, who has admitted to struggling with his own eating disorder in the past, remembers feeling alienated by trying to emulate a body image that was impossible to obtain.

“But now, if anyone else is going through what I went through, they can see that someone who looks like them, or who has a similar body to them, that is confident and loves their body,” Gerges says, “even though it doesn’t look like the bodies we’re conditioned to find attractive. And hopefully, they’ll feel less alone.”

While Gerges is still on a body confidence journey, he hopes that by starting this dialogue the media will start to do a better job showing different types of male bodies.

“We need to do better when it comes to representation, to show that men have stretch marks and rolls, too, and that all sizes are desirable and worthy of visibility,” he says. Until then, he’s going to continue to work every day to love himself and change the notion that people need to change the skin they’re in.

Amanda Scriver
Amanda Scriver is a passionate storyteller and body image advocate based out of Toronto, Canada. When she isn't writing for various publications, she finds time to Keep Up With The Kardashians while partaking in life's greatest pleasure: the chip buffet. Don't ask her what her favorite restaurant is, it's complicated
Body Positive
Body Positivity
Body Positive Every Body
More From Body Positivity

Perfect Gifts for The Homebody in Your Life