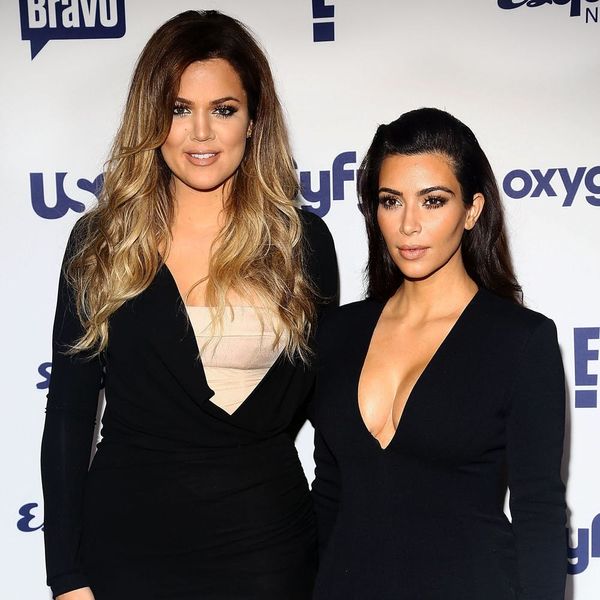 With many headed home for the holidays (though if you can’t, we highly recommend glamping with your gals), some of that old sibling rivalry you once (or still) feel with your bro or sis is bound to resurface on some level, because, well, it’s a natural human thing.

For some (*ahem, the Kardashians), every little disagreement, every moment of bickering is subject to documentation for the cameras — the pitfalls of fame, areweright?

That dynamic has been particular hard on one Kardashian in particular: probably because she’s constantly being compared to her famous sisters.

In a recent interview with Health magazine, Khloe gave some insight about how she handles the constant criticisms. Revealing that she got healthy by swapping her bad habit of overeating due to stress for working out, she says she started her new curvy denim line, Good American, after being shamed while shopping with her sisters. “Yeah. I was always alienated when I’d go shopping with my sisters,” she told the outlet. “If you were an 8 or a 10, they’d gasp, so as a 12, which I was at one point — God forbid! — they’d shun me, and it was horrible.”

I never thought I would EVER be on the cover of @healthmagazine But hard work pays off! Mind, body and soul! It's a lifestyle especially when I still love to treat myself with my favorite foods but that's the balance of life! 📸 @jameswhitefoto Glam: @cesar4styles and @1maryphillips Styling by my boo @monicarosestyle

Even those that have helped her get in shape haven’t been entirely innocent. Khloe says that when she began seeing a nutritionist after a year and a half of working out, she was subject to some… less than flattering comparisons.

“I don’t process carbs well after 3pm. Kim can eat anything, and I’m like, ‘I hate you.’ The nutritionist was like, ‘Kim has a body like a Ferrari, and you have a body like a Honda.’ I was like, ‘Yep, that sounds about right. That’s my life — you just summed it up right there.”

Ouch! We can’t help but feel like that comment was a little… harsh. We get that different people have different metabolisms, but to compare Khloe’s body to Kim’s in those kind of terms just feels wrong. Luckily, Khloe didn’t let it get her down — the quote was followed by a note that she even laughed while telling the story.

Girl should be laughing — all the way to the bank. That inclusive denim line we mentioned? It sold more than $1 million in a single day, so clearly, there’s quite a few ladies out there that relate to her struggles.

How do you deal with comparisons to siblings or other family members? Share with us @BritandCo.

Nicole Briese
Nicole is the weekend editor for Brit + Co who loves bringing you all the latest buzz. When she's not busy typing away into the wee hours, you can usually find her canoodling with her fur babies, rooting around in a bookstore, or rocking out at a concert of some sort (Guns N' Roses forever!). Check out all her latest musings and past work at nicolebjean.com.
Family
Celebrity News
Family Fitness Kardashians
More From Celebrity News