This Is Us Season 1, Episode 15 Recap: Jack Pearson’s Son 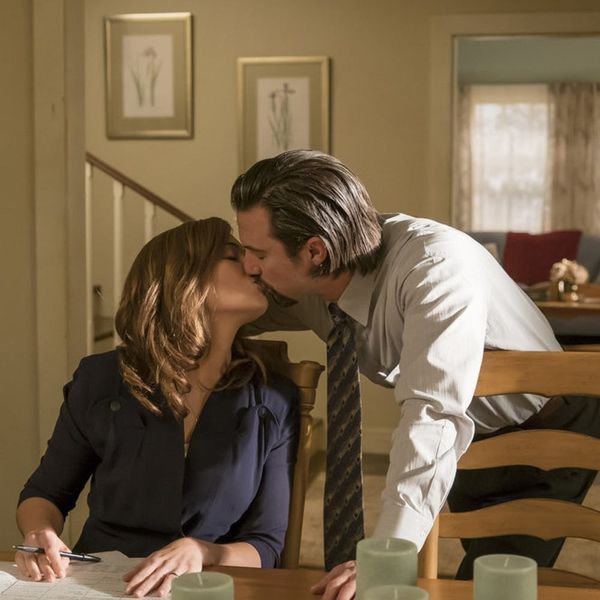 Valentine’s Day with the Pearson family — also known as, my emotions are overwhelmed and my mascara is running down my face. But what else is new? This Is Us showed us how hard it is to love — even if it looks easy, as we so often see with Rebecca and Jack, OTP for life.

In the past, Jack is preparing for Valentine’s Day by planning to take Rebecca out for dinner and greasy cheeseburgers after her show. Rebecca is making a list of everything Jack needs to do when she goes on tour, and Jack is still the Best Supporting Husband… but when Miguel comes to talk to him at work, he reveals he’s not that happy about her decision. Newly single Miguel tries to cheer him up by asking him to come out for bro time, but Jack invites him to Rebecca’s show, instead.

We get our first look at the Pearson kids as older teenagers, and HEY, Kevin grew up! Rebecca overhears the kids talking and finds out Kevin is having sex with his to-be-wife Sophie. Rightfully affronted and worried, Jack and Rebecca sit him down for “The Talk” about respecting women and condoms and all that good stuff, but they’re interrupted by Randall who is having (the first of what is probably many) anxiety attacks over a test. Jack more or less abandons Kevin to calm Randall down, and it’s not hard to see why Kevin has so many insecurity problems. Rebecca sees it too, and claims she can’t go on tour because there’s no way Jack can handle three kids like this at such vulnerable stages in their lives.

Jack’s quiet resentment over Rebecca’s tour decision gets worse, and his temper finally hits the fan when he talks to Ben, who reveals that him and Rebecca used to date. Oh, but that’s not the worst thing he hears all night. He also finds out that Rebecca wasn’t ever really into the idea of family life. Put two and two together — the jealousy, the fact that it looks like she’s running off with an old boyfriend to be on the road and do what she really loves when she never intended to settle down — and you’ve got one angry Jack, who explodes in Rebecca’s face and finally tells her he doesn’t want her to go. Sure, Rebecca was kind of in the wrong in that she didn’t bring up her relationship with Ben because it wasn’t a big thing and she knew he would be angry (isn’t this why Toby is waiting to marry Kate?) But this isn’t the first time we’ve seen Jack’s flaws of anger and jealousy come out. And at the end of the episode, we see Jack eating his Valentine’s Day cheeseburger — alone. And drinking again. This isn’t good. It’s also not a great Valentine’s Day, but then again, This Is Us has a knack for unraveling relationships during holidays.

Kate goes to Cabin 13, BUT it’s not what we expect. She defends herself and tells Duke how awesome she is, how much of a jackass HE is, and when all is said and done, Duke drops the bombshell that his parents own the camp. And, welp. There goes that. Kate is kicked out of fat camp, and walks right back into the arms of Toby. She apologizes, and good on Kate for realizing she acted like a jerk. (I still think Toby was a little out of line himself, but Kate was, also.)

Toby confesses he was jealous and worried she would leave him for Duke (“the Jared Leto of fat camp”) which is partially why he acted that way. But then he says he realizes they’re going to get married, and they don’t know that much about each other. So while shopping for clothes to wear for Kevin’s opening night, they try to get down to the basics: you know, first celebrity crush, family pets, that sort of thing. Eventually, they talk about heavier things — Kate asks Toby about his depression, and Toby asks her about her dad’s death, which she never really talks about. Will we FINALLY hear a little more about how Jack Pearson died? No, of course not, because Kate can’t talk about it. Not until she’s ready, which Toby at least respects. (Does Kate feel totally guilty about something that happened? I need all the details about what went on, NOW.) Later, before they go into Kevin’s play, Toby says he thinks they rushed things with the engagement. They’re still engaged, but rather than rushing into getting married, he thinks they should take their time. You can tell Kate kind of agrees, but at the same time, she’s totally crushed. Ugh, Kate feels.

Kevin is being interviewed by Katie Couric about his role in The Manny and how he got started in acting. But then Katie brings up sleeping with the actress and the playwright of his play that he’s starring in, and this HAS to be a dream right? Oh, yeah. It’s a dream. A nightmare, to be exact, and one that Kevin has been having for years, because when Sophie calls she knows that Katie Couric has left to play tennis with someone more important. It’s Kevin’s opening night, and Sophie can’t go after all because of work. But the good news is, his family’s going to be there. AND apparently Kevin and Sophie are cautiously dating. Lava fries FTW! They work every time.

Freaking out, looking for advice, and feeling alone because Kate won’t return his calls, he goes to Randall, who isn’t much help. Out of options, he tries to talk to his mom, but only finds Miguel when he shows up to the house. So he ends up talking to Miguel, because he needs to talk to SOMEONE and he’s freaking the heck out. Miguel tells him how when he was nervous, he’d talk to Jack, because Jack was his “person.” And Kevin’s step-dad finally addresses the whole disconnect between them and admits he was upset that Kevin never liked him, because he reminds him so much of Jack — “You are Jack Pearson’s son.” Excuse me while I cry. (Also, maybe it’s just me, but Miguel TOTALLY shot up in the point zone after tonight.) Miguel’s confidence boost is exactly what Kevin needs, because it’s what causes him to make the bold (and risky) choice to bolt from his own opening night when he realizes his brother needs him. And boy, Kevin’s growth over the course of these episodes…I need so many tissues.

"I talked to your dad. He was my person." #ThisIsUs pic.twitter.com/Z0grMZ9HvF

While Jack struggles with having to parent three teenagers who are all having their own issues, Randall is struggling to parent everyone in his life when Beth leaves him to attend to her own mother, who has had a fall. His kids are arguing, William is getting worse, and work is stressing him out so much that his anxiety attacks are back in a bad way — stress tremors, breakdowns, blurred eyesight. Randall overcompensates for his stress by pushing himself to the limits, and as we’ve seen, it doesn’t always end well. After breaking down in a meeting, he calls Kevin to say he won’t make his show after all. Kevin, feeling like something is wrong, has to make a decision, and he does what he thinks his dad would do — he runs. And in a truly heartbreaking scene, ends up comforting Randall alone in office late at night. Quite a change from the boy in the past who spied his brother having an anxiety attack and crying at his computer while doing homework, but turned the other way.

And yeah. We have tears.

We've got you. Everything is going to fine. #ThisIsUs pic.twitter.com/GpXrhaKraK

Jack gives Randall a pep talk when he’s freaking out about a test — but kind of abandons Kevin in the process — 3 points: I love that Jack is so good to Randall, but come on, this is a SEX TALK.