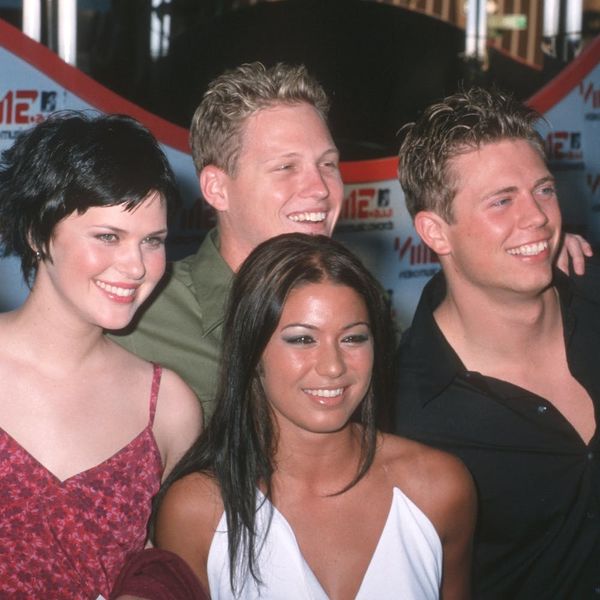 It’s been a big year for in-ring announcements frome WWE stars! First, John Cena blew us away by proposing to his love Nikki Bella just moments after they defeated The Miz and his wife Maryse in a co-ed tag team match. Now, the latter pair of wrestlers is back with some exciting ring news of their own to share!

Standing in the center of the ring together on Raw Monday night, the pair, whose real names are Michael and Maryse Mizanin, announced that they’re expecting their first child. Eee!

Those that are unfamiliar with the world of wrestling will surely recall at least one of the characters from Mike’s reality TV days on The Real World: Back to New York back in 2001, as well as the subsequent challenge shows he participated in. It was on the show where he first introduced his alter ego, which was, essentially, a more brutish version of the dude’s normally chill personality. Realizing his second self would make a great wrestling persona, the rest quickly became WWE history, with his relationship with Maryse going on to become a key element of the dynamic duo’s story lines, with their latest news sure to become the biggest one yet.

“My wife Maryse and I, have a very special announcement that will change WWE forever,” The Miz said while looking ominous in a hood and dark sunglasses. As his partner smiled beside him, he took off his shades, adding “My wife and I, have been thinking long and hard about how we wanted to announce this special news… and we thought there’s no better place to announce it than the first place that we met. That is here in the WWE, in front of all of you. So, without further ado, my wife Maryse and I… uh… go ahead, babe.”

Throwing things over to his lovely lady, Maryse smiled wide and revealed, “We’re having a baby!” Oh. Em. GEE!

While one might have expected the soon-to-be father to pop open a little bubbly in celebration, he immediately went on to wrestle Enzo Amore, who won by disqualification. Still, we’re sure the 36-year-old first-time dad will still look back on the day fondly.

Now, we’ll just have to wait and see if The Miz and Maryse introduce their bundle of joy in the ring just like they announced that he or she is on the way. Fingers crossed!

Do you remember The Miz from his The Real World days? Let us know @BritandCo!

Desiree O
Desirée O is a ‘Professional Bohemian’ who loves anything and everything related to the arts, entertainment, and pop culture. She ADORES being a ‘Newsy’ for Brit + Co, covering all of the latest tidbits of awesomeness that you want to read about. When she’s not writing, she’s either making messy art, going on long adventurous walks with her camera, or poking around over at bohemianizm (http://www.bohemianizm.com/). You can find out about Desirée O and her work at http://DesireeO.com/ or follow her on Twitter @DesireeO.
Celebrities
Celebrity News
Celebrities Celebrity Baby TV
More From Celebrity News