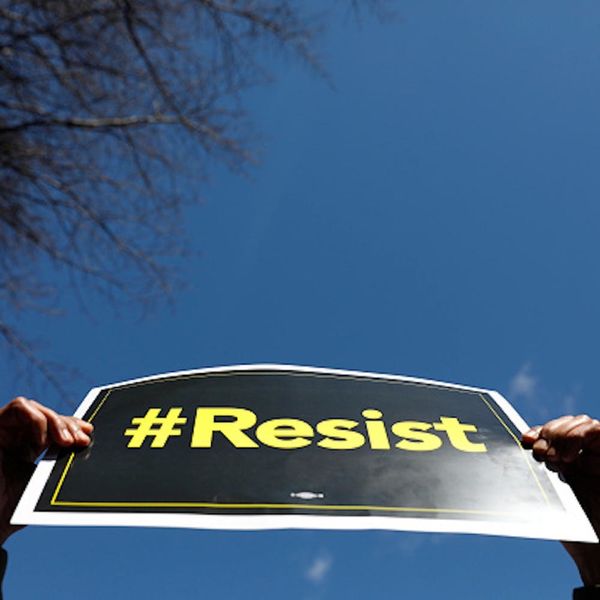 The first 100 days of Donald Trump’s presidency have had an abundance of controversies. From the historic travel ban to compromising many facets of women’s reproductive health, to name just a few, it often feels like it’s been a fight from day one for upholding basic human rights.

The team that President Trump appointed around him has courted just as much controversy as his own election — there’s the potential conflict of interest in having his son-in-law Jared Kushner in the administration and his daughter Ivanka work from the White House, and everyone from Secretary of Education Betsy DeVos and Supreme Court Associate Justice Neil Gorsuch have also drawn criticisms. Attorney General Jeff Sessions was even met with protests at his confirmation hearings earlier this year, and just this week one woman was convicted after simply laughing during the hearing. She could now face a year in prison.

During the confirmation hearing, Desiree Fairooz, a longtime activist with the anti-war group Code Pink, was removed from the room for laughing during a comment about Sessions’ fair treatment of all Americans under the law (Sessions has famously said in the past that he was okay with the Ku Klux Klan until he found out they smoked pot. Yep). So, Fairooz laughed at that seemingly ironic comment, was escorted out for it, and was later charged with disorderly and disruptive conduct. A second charge for “parading, demonstrating, or picketing within the Capitol” was also given as she was removed.

Another protester escorted out of Sessions hearing. Her original offense appeared to be simply laughing. pic.twitter.com/p6lWzBVFRW

Many, as a quick Twitter search shows, can’t help but point out not only the scary precedent this sets, but the ridiculousness of what has happened — particularly as it applies to the DOJ’s repeated decisions to not press charges against police officers in shooting deaths of unarmed POC.

The USDOJ is prosecuting a woman for laughing at Sessions but not police related homicides? 😒😒🤔🤔

Others pointed out the brief and maddening Brock Turner case as a comparison.

Brock Turner served 3 months in jail for raping a woman.

Desiree Fairooz is facing a year in prison for laughing at a man.

Now, Fairooz, a retired children’s librarian, could face a year in jail and/or a fine — for laughing at Sessions — but as she told Vox, she regrets nothing. “I do not regret what I did,” she said. “I do not regret dissenting at the confirmation of Sessions, and being part of a visible statement to draw attention to a dangerous man who does not deserve to be attorney general. This was and is my responsibility as a citizen.”

“Resist the government’s efforts to infringe upon our rights — or sit back and watch them disappear.”