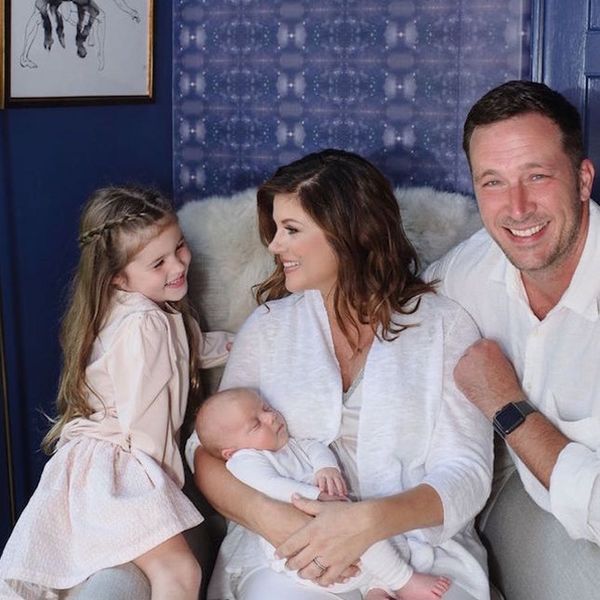 Celeb nurseries are something we constantly obsess over. With their killer style, large budgets and creative designs, these baby rooms are spaces we wouldn’t mind living in ourselves. Our latest fave is Saved By the Bell star’s newborn son Holt’s nursery. Once we got a peek at the cute li’l guy via Instagram, we knew he was destined for great things in the nursery design world. Lo and behold, Tiffani — along with her adorable fam — just revealed Holt’s sci-fi-inspired nursery. Take a peek!

With help from longtime friend Christine Lemiuex, who just so happens to be an experienced designer and the founder of DwellStudio, Tiffani and hubby Brady were able to design a nursery that encompassed their home’s traditional-modern style and Brady’s Star Wars memorabilia. This theme all came out of one of Brady’s favorite pieces: his Darth Vader phone.

From that initial theme, Christine and Tiffani began to think much bigger — like universe and galaxy bigger — and went with dark walls and light furniture to achieve a more space-like vibe. And space-like it is. With the galaxy-inspired wallpaper (via Eskalyel) and indigo blue walls, it feels like you are riding aboard a much nicer, chicer version of the Millennium Falcon (sans Chewie, of course). Sticking with the space theme, Christine incorporated Brady’s sci-fi pieces (Darth Vader phone, R2D2 mug and lots of colorful Star Wars storybooks) on a flawlessly styled mid-century bookcase for a beautiful vignette.

The light, mid-century furniture provides a nice contrast to the dark, moody walls and ceiling in this space. In order to stick with the traditional and modern style of their 1920’s home, Christine also added metallic accents on the lamps, side table and globe for the perfect finishing touch. The pops of color on the bookcase go with the mid-century modern vibe, while also keeping it playful and bright.

The textiles in the nursery were also kept light and neutral to balance out the dark elements in the space. With a mix of grays, ivories and beiges, each little nook is peaceful and relaxing. The sheepskin rug is a great place for Holt to crawl around and play with his older sister, Harper. And the modern rocker, with the cute accompanying galaxy pillow, is a serene place for mama and baby to rest. We also love how they brought in some cute galaxy linens for Holt’s crib and changing station.

The force is definitely strong in this space. Congrats to the happy family!

What do you think of this Star Wars-inspired nursery? We’d love to hear from you — let us know in the comments below!

Katie Bond
Katie is the Home + Parties Editor at Brit + Co. She works with writers to develop the most colorful, creative and Pinnable home content on the web. When she's not working away on her laptop, you can find her hanging out in surferburbia (aka The Outer Sunset), lounging in Golden Gate Park or learning to surf on her brand new longboard.
Nursery
Home News
Nursery Wallpaper
More From Home News