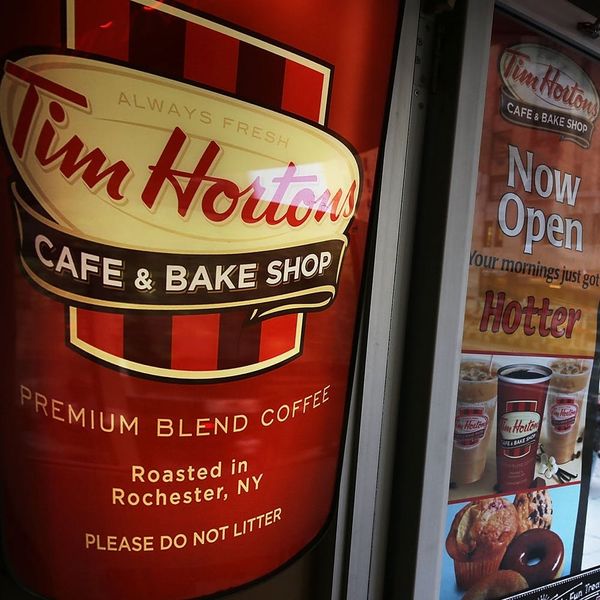 Canada is known for many things. Their hunky Prime Minister, Drake, Celiné Dion, and of course, its very unique drunk food, poutine. This mix of fries, cheese, and gravy was invented in French-speaking Quebec, but has since become a national dish. In honor of the country’s national celebration of Canada Day on July 1, Canadian coffee chain Tim Hortons is mixing the standby up a bit with plans to sell a — get this — poutine donut.

That’s right! To honor our neighbor to the North’s 150th anniversary, the fast-food chain will be peddling a honey-dipped donut complete with cheese curds, gravy, and potato wedges for fries on top. Needless to say, people are shook.

Ok. Let's all just calm down and take a step back. This #canada150 thing is getting to us. https://t.co/apbpkkr9yt

There is now poutine on a donut…
I'm going to bed. I've had enough. This world is too crazy for me.

More surprising than the fact that this is even happening, perhaps, is the fact that the treat actually won’t be available in Canada at all — in fact, only five select US stores will carry the treat, including Columbus, Ohio, Rochester Hills, Michigan, and three more in New York (Derby, Hamburg, and East Aurora). “At Tim Hortons restaurants, we’re proud of our Canadian heritage and we want to share a piece of that in the United States,” the brand explained in a statement. Still, Canadian patrons aren’t impressed.

I'm honestly pissed that Tim Hortons is making a poutine donut and it's only available in the US. I'm a Quebecer GIVE ME MY POUTINE! Please.

That Tim Hortons poutine donut is only available in the states!?!? AHH THE BITTER TASTE OF BETRAYAL

For those willing to travel, the chain is also offering a Maple Bacon Iced Capp (which is essentially the Tim’s equivalent of a Frappuccino), and maple bacon flavored “Timbits” (AKA donut holes).

This just might be worth the drive, if only for the novelty of it all!

Would you try a poutine flavored donut? Tell us @BritandCo.

Kat Armstrong
Kat has been a writer, social media maven and mom for longer than she's willing to admit. She's also spent time in front of and behind the camera, interviewing celebs, politicians and acting as a producer for fashion and artistic photography shoots. When she isn't writing for various orgs and publications, she's hanging with her kids, husband and French Bulldog, Peter, in Toronto, Canada.
Dessert Recipes
Food News
Dessert Recipes Fast Food
The Conversation