Tonga’s Famous Shirtless Flag Bearer Is BACK for the 2018 Winter Olympics! 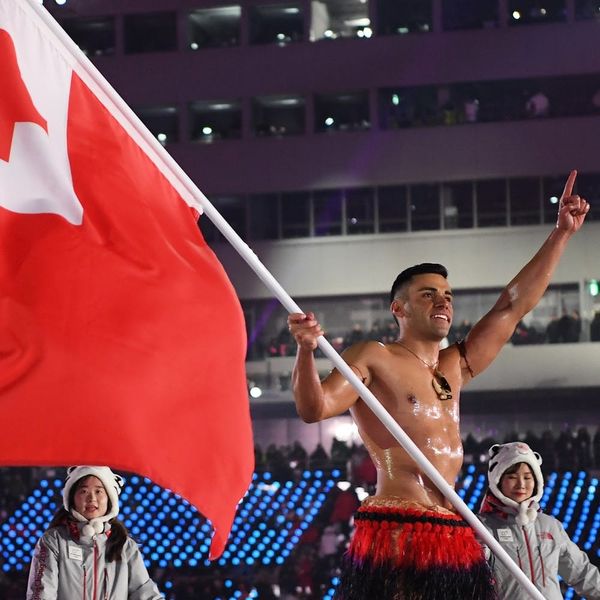 The 2018 Winter Olympics have officially kicked off, with the opening ceremony taking place on Friday in PyeongChang, South Korea. While Americans were excited to see luger Erin Hamlin lead Team USA, and the world watched as North and South Korea united to enter under a single flag, we couldn’t help noticing one very familiar face in the crowd: The oiled-up, shirtless, Tongan flag bearer is back!

You might remember Tonga’s flag bearer — Pita Taufatofua — from the 2016 Summer Olympics in Rio. Wearing a traditional Tongan costume and with nothing covering his torso except a lot of shiny oil, he joyously waved his country’s flag before competing (and losing) in taekwondo.

Following his exciting experience at summer games, Taufatofua put martial arts on hold to take up cross-country skiiing so he could compete in the 2018 Games. And even though it’s the coldest Winter Olympics in 20 years (Team USA literally wore heated coats!), the athlete still opted to go shirtless for the Opening Ceremony, something he told the media he would not be doing.

“I want to still be alive for my race,” Taufatofua said, according to USA Today. “It is going to be freezing outside, so I will be keeping nice and warm.”

Shirtless or not, Taufatofua is a welcome surprise at the Winter Games, especially since he had never even seen snow before he took up training for cross-country skiing — which he started on rollerblades. “Every time I ski, I die a little bit inside,” he said recently, per USA Today.

We can’t help but feel inspired by his attitude and drive — win or lose, he’s a true Olympian!

Were you happy to see Taufatofua back at the Olympics? Let us know @BritandCo!