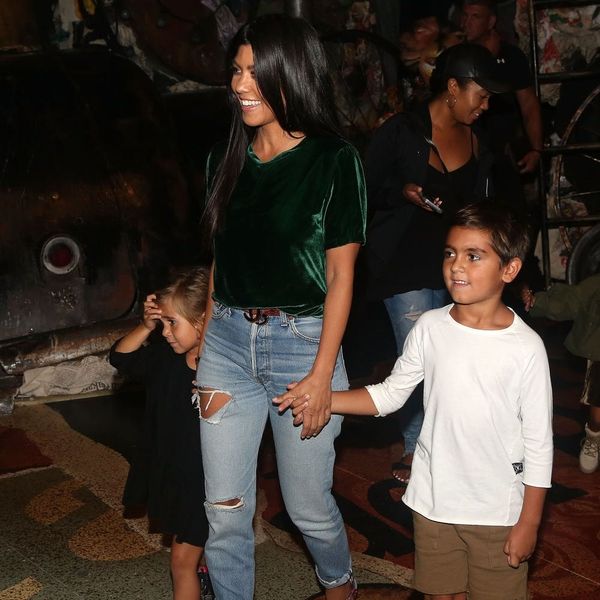 It’s no secret that the youngest generation of Kardashians (Mason, Penelope, Reign, North, and Saint) are just as fashion-savvy as their superstar moms. Now, thanks to proud mama Kourtney Kardashian, we know that it even extends into their bedroom decor. Kardashian showed off her seven-year-old son Mason’s Star Wars-inspired bedroom and, predictably, the style force is strong within it.

“Right now, Mason is really into Star Wars, so he and I created a room filled with glow-in-the-dark elements and lots of star motifs,” she wrote in her app. The mom of three merged Mason’s love of Jedis with her sophisticated (and also practical) sense of style. For example, she recycled a Tim Oulton chrome dresser from Mason’s nursery and paired it with tonal shelves to display his favorite toys and collectibles. So clever and so space-y!

And it’s even cooler when the lights are out! “At night, we put on a cool star projector that blasts the ceiling and walls with stars and the Milky Way,” she shared. Mason’s room is also optimized for sleepovers, with two Restoration Hardware full-size bunkbeds pushed into a corner. Imagine drifting off to sleep with the stars and galaxy swirling around you. Sounds dreamy.

But don’t think that Mason didn’t get a say in how his room looked; he definitely signed off on everything. “Martyn Lawrence Bullard showed me this amazing constellation wallpaper from Ralph Lauren, which Mason and I loved. We covered the ceiling in it,” Kardashian wrote. It looks like little Mason is already developing his own sense of style. Maybe he’ll have his mom’s knack for decorating too!

Do you have child bedroom or nursery design ideas you want to share? Tell us @BritandCo!