Trump Has Signed a Directive to Send Americans Back to the Moon — and, Eventually, Mars 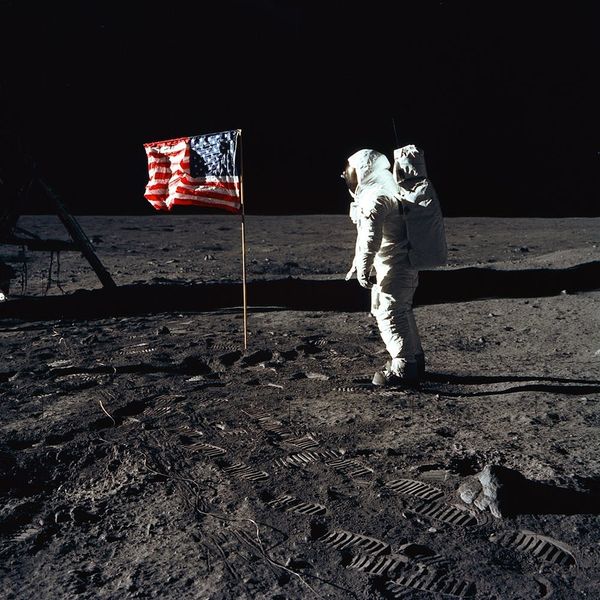 At least that’s what President Trump is hoping. In an announcement Monday, the president signed Space Policy Directive 1, which partners NASA and the private sector in an effort to send American astronauts to the moon and — fingers crossed! — Mars.

“This time,” said Trump in a speech at the White House, “We will not only plant our flag and leave our footprints — we will establish a foundation for an eventual mission to Mars, and perhaps someday, to many worlds beyond.”

Presidential moon ambition is super common, but also super expensive. There’s a reason it’s been 45 years since the last Apollo mission had a man making tracks in lunar dust. As NPR points out, no human has traveled beyond low-Earth orbit since the early 1970s, and the main reason is cost.

George W. Bush announced plans to send astronauts back to the lunar surface in 2004, but reneged on those plans after it because clear it would cost billions in unavailable funding. The Obama administration looked for an alternative to the moon-then-Mars model, and for a while suggested harnessing an astroid to get us there. Trump’s directive ends the astroid plan, which was widely panned by the space community anyway.

Trump’s plans, outlined in more detail in October by Vice President Pence, would use a moon base as a jumping off point for eventual travel to Mars.

NASA is currently also working on a project known as Deep Space Gateway. The goal is to explore deep space in the moon’s orbit, in the hopes of prepping astronauts for travel to more distant destinations like Mars. A rocket and deep space capsule is currently being constructed, with the first flight planned for 2019, when it will send an unmanned capsule into orbit around the moon. A manned mission is not scheduled until 2022.

Private companies have also entered the space travel game in recent years. SpaceX has already built a rocket and plans to send customers around the moon as soon as next year, and Boeing is building a space transport system that could shuttle astronauts and cargo to and from the space station. If that happens, it will be the first time in decades that American astronauts will travel to the station from American soil. They are currently shuttled back and forth in Russian capsules.

Lia Grainger
Lia Grainger is a freelance journalist and reluctant nomad who divides her time between Canada and Spain, weather dependent. She's written for The Atlantic, Reader's Digest, the Toronto Star and other print and online publications, and her work appears in dozens of languages around the world.
Politics
Current Events
Politics science