Confession: I Look Like My Pet and I’m Okay With It 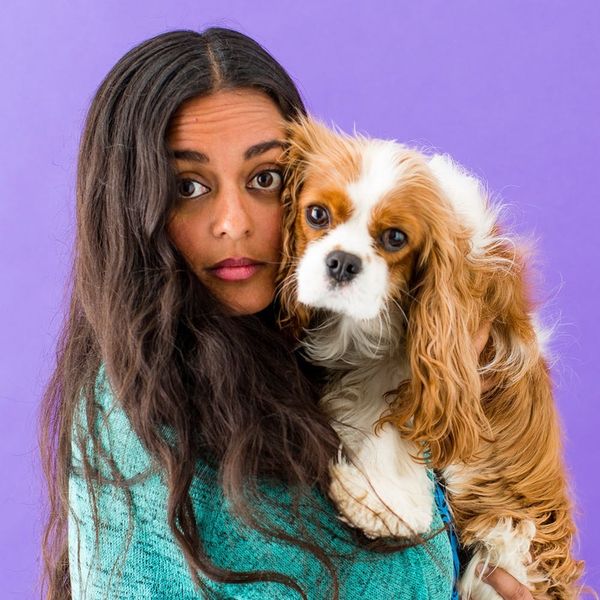 I’ve known for a while that my features were different from the people around me. Not unique, per say, but not quite… human. As a kid born in the ’80s, I used to look at ewoks from Star Wars and feel immediate kinship. What I didn’t know then is that I would eventually own a dog named Turkey Temple — my true doggelgänger.

Sometimes I wink at him and he winks back. Sometimes when we’re walking in the park, people do a double take. And sometimes when I look at him, I see myself.

It started as a joke. When my husband David and I were gifted Turkey as a wedding present (that’s right!), our parents and siblings teased that he got his eyes from me. Then it became his whole face, his hair and even his expressions, and ability to close one eye completely without squinting the other. At the time, it was still in jest.

Until we took THIS selfie together.

And then another one.

You know how they say that a photograph can reveal truths that you can’t see in real life? That first selfie of me and Turk was one of those moments. First I thought, okay we’re making the same face, this is hilarious, can’t wait to send it to the husb. But the more selfies I took, the more I realized we were morphing into one being.

When we’re on a hike, we both rock a top knot.

Glam sunnies are a must when picnicking at Golden Gate Park.

David tried to twin it up with us as well and, though he’s a looker, he just isn’t our twin. (Which is a good thing, since I’m married to him…)

Neither of us actually wear glasses, but there we are — twinning.

Two gnomes are better than one, don’t you think?

Now, you might look at these photos and think, well, they don’t look that much alike. She has black hair, he has brown. She has tan skin, he’s more of a mix of both brown and white spots. What about that snout of his? But here’s the thing. Truly twinning goes way beyond the surface — it’s about the soul, intentions and history behind those eyes, snout and ears. And that is where Turkey and I truly found our twinship.

In fact, our particular power to match inspired a DIY pet-dog owner costumes for Halloween just a few months ago.

It feels good that I’ve finally come to terms with this visual and spiritual reality. Spending every day with my doggelgänger is an absolute joy, and I wouldn’t have it any other way.

Anjelika Temple
As Co-Founder and Chief Creative Officer of Brit + Co, Anjelika Temple brings her voracious consumption of all things creative and colorful to DIY projects, geeky gadgetry finds and more. When she's not DIY-ing her heart out, you'll find her throwing dinner parties with friends or adventuring with her husband David, their daughters Anokhi and Indira, and their silly dog Turkey.
Pet + Co
Entertainment
Pet + Co
More From Entertainment