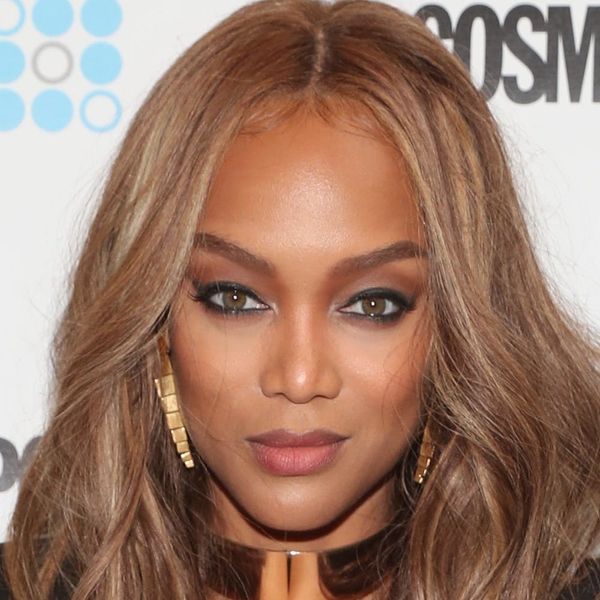 Tyra Banks may know *exactly* what to do on the runway, but she’s still figuring it all out when it comes to being a parent in the public eye. The supermodel became a mommy in January of last year via surrogate, but for more than a year, we had no idea what her little tyke looked like. While she eventually opted to share a shot of her 18-month-old son, York Banks Asla, the 43-year-old says it didn’t exactly go according to plan.

“It wasn’t so much that I was itching for the world to see him,” she explained on Late Night With Seth Meyers this Thursday. Instead, she says she felt the need to share a pic of her son before the paparazzi got a chance to do so.

To all the amazing daddies out there that love their kids unconditionally like my mommy's daddy and my daddy, too...HAPPY FATHER'S DAY! -York💛

The decision was one Banks made on the fly after being spotted by photogs while she and York were returning from a Father’s Day outing with his dad, photographer Erik Asla, and Banks’ own father. “I’m trying to hide him with a blanket,” she recalls. “I pull over to the gas station after they get the shot, I text his dad, and I’m like, ‘I’ve got to put this picture out before the paparazzi. I don’t want them to make money off of our child and have the first picture… I’ve gotta beat them to the punch. So, I post the damn picture.”

Her plan worked a little too well, however: As Banks said, “The next day, there ain’t no paparazzi pictures, ’cause mama knew how to hide [him from] that camera! She’s a supermodel for a reason! And so now his picture is out there and I didn’t need it to be!”

OOF! While she may not have been fully ready to share little York with the world, we’re glad the incident gave us the shot in question: He’s absolutely darling!

Watch her interview in full below.

What do you think about famous parents posting pictures of their children to social media? Let us know @BritandCo!

Desiree O
Desirée O is a ‘Professional Bohemian’ who loves anything and everything related to the arts, entertainment, and pop culture. She ADORES being a ‘Newsy’ for Brit + Co, covering all of the latest tidbits of awesomeness that you want to read about. When she’s not writing, she’s either making messy art, going on long adventurous walks with her camera, or poking around over at bohemianizm (http://www.bohemianizm.com/). You can find out about Desirée O and her work at http://DesireeO.com/ or follow her on Twitter @DesireeO.
Parenting
Celebrity News
Parenting social media
More From Celebrity News