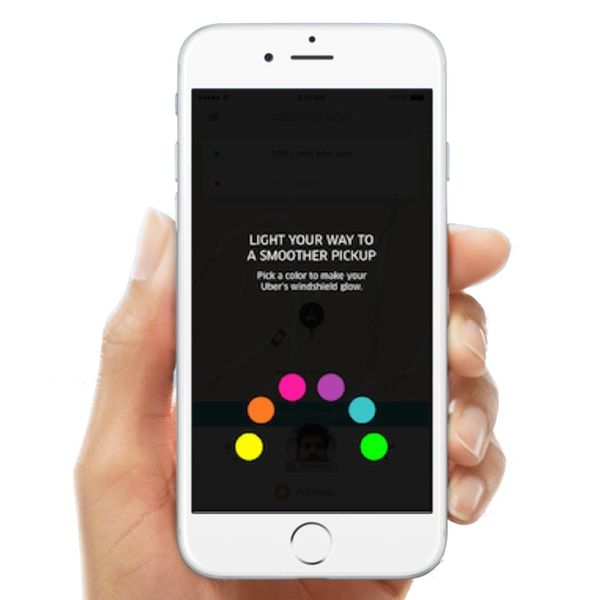 This scenario might sound a bit familiar: You met up with a couple of old friends for a night out, fast forward five hours and six drinks later and it’s time to call a car and head home to your comfy bed. Problem is, you’re at a local hotspot and just about everyone is ordering an Uber. Which one is yours? Uber wants to help you eliminate any confusion as to exactly which car is the one you ordered with a nifty new update.

The ride-sharing company is now enabling a new feature they call SPOT. How it works is simple… and colorful. First, you call a car through the app as you normally would. Then, after the app has matched you with a driver and while you’re waiting, Uber will allow you to select a color through a pop up feature that will help you identify your car. Cars that are SPOT-enabled have a light strip in their windshield, and as your car pulls up, that light strip will be illuminated in the color of your choosing. Easy peasy, amirite? Even if you’re a leeeetle tipsy, you don’t have to worry about getting into the wrong car again.

According to Uber, this update is one more of their ongoing experiments in making “Uber pickups as seamless as possible.” Sadly, this update is currently only rolling out in Seattle, but it shouldn’t be long before the company takes it nationwide (we hope!).

Go ahead and have fun. Getting home after a night out is easier than ever.

Will you be trying out Uber SPOT? Tell us in the comments below!

Kimberly Wang
Kimberly Wang writes about all things pop culture, tech, style, and beauty. She's a Bay Area transplant and has an MFA in Creative Writing from Columbia University. On a sunny New York day, you can find her hanging out with her mini schnauzer Isabelle Jellybean on a blanket in Central Park.
Apps
Tech
Apps