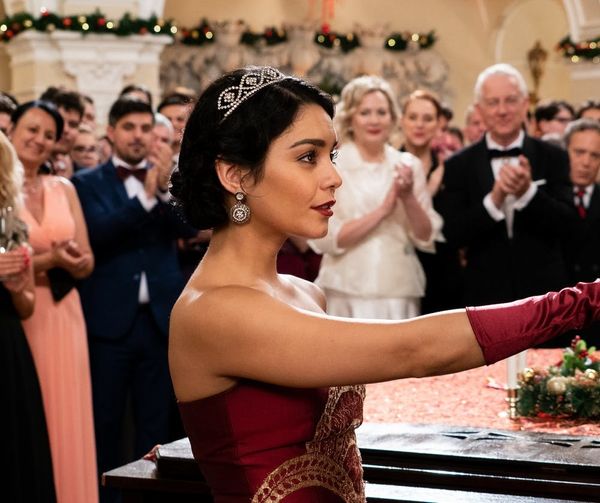 So many holiday movies, so little time! Between the Hallmark Channel’s record number of new original films, Lifetime’s 23 contributions to the genre, and Netflix’s growing slate of seasonal offerings — like The Holiday Calendar and A Christmas Prince: The Royal Wedding, both of which are among the streaming service’s November premieres — there are enough festive flicks to keep us on the couch until January. And now we can add Vanessa Hudgens’ The Princess Switch to that list, too.

Hudgens does double-duty in the Netflix movie, as a Chicago baker named Stacy, who gets an invitation from the royal family of Belgravia to attend a prestigious Christmas competition that takes place one week before the big holiday, and as Lady Margaret, the Duchess of Montenaro, who is about to marry Prince Edward (Sam Palladio) and also happens to look just like Stacy.

Lady Margaret wants a break from the spotlight and longs to know what it’s like “to be a normal girl,” so the ladies hatch a plan to secretly swap identities for two days.

Keeping up the ruse is harder than they expected, though — they have to trade styles, attempt each other’s accents, and (most importantly) fool the people around them. Things get even more complicated when Stacy begins to feel a connection with the prince and Margaret starts to fall for Kevin (Nick Sagar), a single dad who works for Stacy.

The Princess Switch will hit Netflix on November 16.

Will you be watching The Princess Switch? Let us know @BritandCo!

Desiree O
Desirée O is a ‘Professional Bohemian’ who loves anything and everything related to the arts, entertainment, and pop culture. She ADORES being a ‘Newsy’ for Brit + Co, covering all of the latest tidbits of awesomeness that you want to read about. When she’s not writing, she’s either making messy art, going on long adventurous walks with her camera, or poking around over at bohemianizm (http://www.bohemianizm.com/). You can find out about Desirée O and her work at http://DesireeO.com/ or follow her on Twitter @DesireeO.
Movies
Streaming
Movies