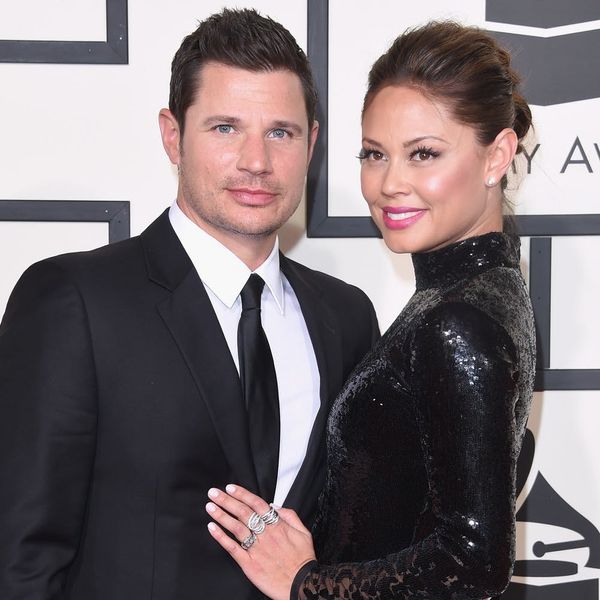 Vanessa Lachey’s stint on Dancing With the Stars has come with a fair amount of drama, including rumors about a feud with her pro partner, Maksim Chmerkovskiy. But last night, the two put their reported differences aside to focus on something much more important. As part of the show’s “Most Memorable Year” night, Lachey and Chmerkovskiy performed a dance in tribute to her family — husband Nick Lachey, daughter Brooklyn, and sons Camden and Phoenix.

In keeping with the theme of the evening, each celeb revealed the most memorable year of their life as the inspiration for their dance. Lachey chose 2017, the year her family was finally complete after the scary, premature birth of Phoenix in the final days of 2016.

“Vanessa and I had already had two wonderful, healthy babies. They both went full term. So, when we were pregnant with the third, we kind of expected the same,” Nick admitted in an interview for his wife’s rehearsal package.

They weren’t prepared for what happened next. “I was in the hospital on bed rest and then my water broke. I was only 29 weeks,” Vanessa explained.

“I’ll never forget when she called me in a panic,” Nick recalled. “‘They’re taking me in for an emergency surgery. Get here as quick as you can.'”

I remember my first Mother's Day with each of my babies! This one is extra special (for so many reasons)! Phoenix literally completes me... and US! It's amazing how much more Love you find in your heart for your family as it grows. Let me be the first to tell you Mama's who want more kids... it keeps getting BETTER! ☺️ I Love You Camden John. I Love You Brooklyn Elisabeth. I Love You Phoenix Robert. And I'm so grateful for you @nicklachey (and of course I Love You, too!) Happy Mother's Day to all the Mama's out there! Your unconditional Love is magic! 💖💫💖

The TV host said she remembers looking up from the operating table and not recognizing any of the faces above her. Her worries, though, weren’t for herself, but for her unborn child: “I remember thinking, ‘I hope the baby’s okay. And don’t worry about me. Just make him okay.'”

The doctors successfully delivered little Phoenix Robert, but he had to stay in the NICU for six weeks. “I was scared to see him because I — I think as a man, you want to believe you can protect your kids, protect your wife,” Nick said, breaking down in tears. “I’ve never felt so helpless. There was nothing I could do.”

“What I’ve found is so many people go through similar experiences and there is strength in sharing those stories,” the 98 Degrees singer told People after Monday’s episode, which featured his wife dancing to his cover of “Godspeed (Sweet Dreams).”

He also reflected on the lasting impact the experience of Phoenix’s birth had on their family, saying, “Kids in general bring you closer together as a couple and anything you go through and you overcome, whatever that struggle might be, I think strengthens you in the end and you lean on each other.”

Tonight is Most Memorable Year on @dancingabc. For me it was 2017 when our family was complete. For Nick it was 2011 when we got married and started our family. We hope you LOVE the dances! They are super special to us! 💃🏽❤️🕺🏼#TeamBabiesAndBallroom #TeamMomAndPops

“[W]e leaned on each other, and got through it with great friends and family around us, and in the end everything was perfectly fine,” he told People, “so I am thrilled to be able to tell that story tonight and I hope it inspires somebody else out there to kind of keep their head up.”

You can watch the Lacheys compete on this season of Dancing With the Stars on Mondays at 8pm ET on ABC.

Do you appreciate Vanessa and Nick Lachey sharing their son’s birth story? Let us know @BritandCo.