The Gender Divide Is Shrinking in This Suprising Academic Field 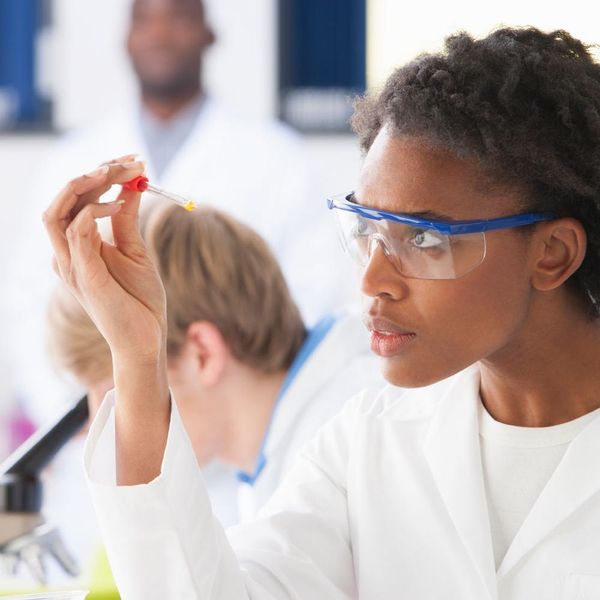 The gender wage gap isn’t the only economic divide between the sexes to have on your radar. Women are also incredibly underrepresented across many career paths — the scientific community included. Research has shown that women are especially underrepresented in STEM fields like engineering and computer science. The difference in opportunities is frustrating, but thankfully, there is hope. Progress (however slowly) is being made in one traditionally male-dominated academic field.

A recent study published in the Journal of Vision that shows that the gender gap is actually shrinking in the field of vision science. Some seriously smart women — Emily Cooper, research assistant professor at Dartmouth’s Department of Psychological and Brain Sciences, and Ana Radonjic, research associate at the University of Pennsylvania — are trying to understand gender inequality in the sciences in order to recommend ways to balance the scale.

Using the gender of attendees at the annual meeting of the Vision Sciences Society (VSS) from the past 10 years as data, the Dartmouth-Penn team compiled dropout rates and career trajectories of women attendees to track their presence and advancement in the field. Not surprisingly, the older the attendees, the more likely it was that they were male. Additionally, recognition of achievement at the conference was incredibly imbalanced. Only one of nine awardees of the Young Investigator Award is a woman, and the members of the review board (judges) are predominately male.

But the reporting wasn’t all bleak. The study found that the younger generation of conference attendees were a much more equally mixed ratio of male and female than older generations. In fact, those women who stay in vision science research beyond the graduate level continue to advance in their careers at an almost parallel rate to men.

So what do these findings mean on a broader level? Radonjic hopes the study will prompt others to begin investigating the why of the divide, so that every scientific field can start taking strides to fix the imbalance.

Cooper says, “Advancement in science should be based on merit, and a scientific community is best positioned to tackle complex problems if it is composed of people with a diversity of backgrounds.” It sounds like an incredibly obvious statement, but with fields like mathematics, engineering, computer science and physics still so male-dominated, Cooper is right to stress the point.

We’re totally enthused that ladies are continually stacking the numbers in their favor in something as important as vision science. If seeing is believing, we’re sold!

Are you in a scientific field in your studies or career? Let us know @BritandCo!