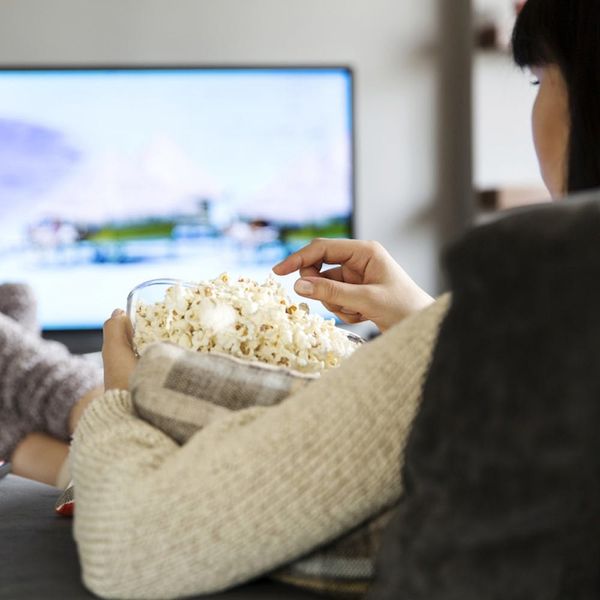 There’s something special about an outing to the movies. The smell of the popcorn, the cushy seats, the incentive to actually put your phone away for a full hour and a half… But at the same time, there are days when you’re just not up for it. And with so many great movies available to stream straight from your couch, we can hardly blame you. If you’ve been wishing there was a way to watch those new releases without heading to the movies (or streaming them illegally), it’s looking like that might soon be a reality.

According to Variety, a new company called The Screening Room is working to allow viewers to watch new releases at home on the day they’re released. The downside? It’s going to cost you. The service would charge $150 for access to the set-top box that transmits the movies, and $50 per movie thereafter. Once you buy the film, you have 48-hours to watch it before it disappears. $50 definitely sounds like a steep price to pay, but if you’re up for hosting a group of friends over at your house to watch the new flick with you, it could potentially end up being cheaper than a standard movie ticket.

Before you throw out your free popcorn coupon, you should know that much of this business concept is still up in the air. Variety writes that The Screening Room is close to finalizing a deal with AMC, but other studios (like Disney) are more wary of the idea.

After breaking the news, Variety placed a poll on their Twitter asking whether or not people would pay $50 for the convenience of watching a new release at home. Surprisingly, only 29% say yes. Offering a legit way to watch these movies from home is definitely an idea that’s in sync with how people consume films today. However, it looks like if studios and theaters want to put an end to pirating once and for all, they’re going to have a find a more affordable way to do so.

Would you pay $50 to watch a new release from your couch? Share with us on Twitter @BritandCo.

Cortney Clift
Cortney is the senior writer and special projects editor at Brit + Co. She typically covers topics related to women's issues, politics, and lifestyle. When she's not buried behind her computer you'll find her exploring New York City or planning her next big adventure.
Streaming
Movies
Streaming