The Hottest Dress Trend of the Summer on the Internet Is… Watermelons? 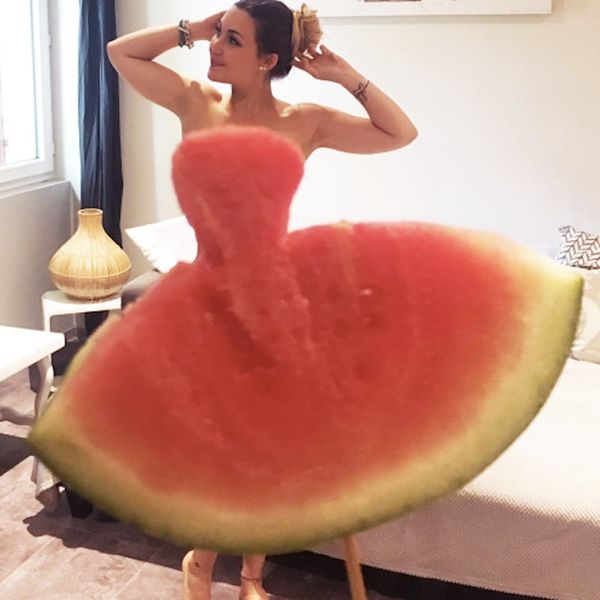 What happens when you give folks on the internet some (okay, lots of) free time? They come up with some pretty wacky stuff. Whether it’s a new dance move or a hilarious challenge issued by a pop star (ahem, Katy Perry), it only takes a hashtag to get something trending. This summer’s latest obsession has officially arrived in the form of a fruit, paired with a little bit of imagination: Say hello to the #WatermelonDress.

To participate, simply cut/bite a watermelon into the shape of a dress, then hold it up just so over a pal’s bod, and snap a pic. Here, a few of the most stylish takes:

Even Ryan Seacrest is donning a #WatermelonDress! “Feeling the breeze between my knees,” the Live With Kelly and Ryan co-host wrote via Twitter. And of course, you should never let gender, age, or even species (LOL) limit you from wearing whatever the eff you want! Anyone can do it, with a little precision and creativity.

This is among things I'm going to miss doing when I go back to work... #babyphotoshoots #watermelondress #jade #fashion #maternityleave #summer #summertrend #watermelon #love #mybaby

Attempting the #watermelondress challenge.... think I'll stick to collars,bows & bandanas. My favorite part was eating my sombrero when we were done with this silliness #watermelon #doodleproblems

TBH… it’s actually kind of cute. Does that come in our size?

Tag us in your best #WatermelonDress pics @BritandCo!

Nicole Briese
Nicole is the weekend editor for Brit + Co who loves bringing you all the latest buzz. When she's not busy typing away into the wee hours, you can usually find her canoodling with her fur babies, rooting around in a bookstore, or rocking out at a concert of some sort (Guns N' Roses forever!). Check out all her latest musings and past work at nicolebjean.com.
Instagram
Style News
Instagram social media twitter
More From Style News